'The Bag of Sand' by St. Heradius

'The Bag of Sand' was written by St. Heradius, who visited, sometime in the fifth century, the hermit fathers of the desert and mountains, and collected many interesting stories about them. (Francesca Alexander (1837-1917))

The Bag of Sand

In that land of desolation

Lay a field where grass was growing

Green beneath the palm-trees’ shade;

And a spring, forever flowing,

Life amid the stillness made.

There a brotherhood, incited

By one hope and purpose high,

Came to dwell in faith united,

Pray and labour, live and die.

Mighty was the love that bound them,

Each to each, in that wild land,

Where the desert closed around them,

One dead waste of rocks and sand,

Saving where, to rest their eyes on,

While they dreamed of hills divine,

Blue, above the low horizon,

There could nought of earth remind them,

Nor disturb their dreams and prayers;

They had left the world behind them,

Felt no more its joys and cares.

Far from all its weary bustle,

Will subdued, and mind at ease,

They could hear the palm-trees rustle

In the early morning breeze.

When the bell, to prayer inviting,

From the low-built belfry rang,

They could hear the birds uniting

With them while the psalms they sang.

From the earth their labour brought them

All they needed – scanty fare.

Life of toil and hardship taught them,

Though at peace, the cross to bear.

This is all their record: never

Can we hope the rest to know!

Names and deeds are lost forever,

In the mist of long ago;

And of all that life angelic

Neither shadow left, nor trace,

Save this tale – a precious relic,

In its wise and saintly grace!

This, above the darkness lifted

By the truth that in it lay,

On the sea of time has drifted,

And is still our own today.

Listen to it, it may teach us

Wisdom, with its words of gold!

Let this far-off blessing reach us

From the desert saints of old.

Underneath the vines they tended,

Where the garden air was sweet,

Where the shadows, softly blended,

Made an ever-cool retreat, --

These good brethren had assembled,

On their abbot to attend;

All were sad, and many trembled,

Thinking how the day would end.

Of their little congregation

One who long had faithful been,

Had, beneath a sore temptation,

What it was they have not told us,

But we know, whate’er the blame,

If God’s hand should cease to hold us,

And for judgement’s wise completing

(Now the crime was certified),

All were called in solemn meeting

On the sentence to decide.

Much in doubt, they craved assistance,

Sent to convents far away,

Even to that fair blue distance

Where their eyes had loved to stray.

Abbots used to think and rule,

Gathered where the brook sang faintly

In the shadow green and cool.

Oh, the beauty that was wasted

On that day, remembered oft!

Oh, the sweetness, all untasted,

Of the morning, still and soft!

At their feet the water glistened,

No one saw, and no one listened

Save to what the speakers said.

Long and sad was their debating,

While, the gloomy tale relating,

Each in turn his judgment gave.

“Send him from you!” one was saying

Calmly, as of reason sure;

“All are tainted by his staying,

“For the shame and sorrow brought you,

Let him be to all as dead!

Harm sufficient has he wrought you!”

But the abbot shook his head.

For the sin which had undone him,

For much evil brought about,

He would lay a burden on him,

But he could not cast him out!

All night long the distant howling,

While he waked, of beasts of prey,

Made him think of demons prowling,

Come to snatch that soul away.

Said another: “I would rather

That his shame by all were seen.

Do not spare him, O my Father;

Let the blow be swift and keen!

“Let not justice be evaded!

Keep him, bound to labour hard,

With you, but apart degraded,

And from speech with all debarred!”

This the abbot not refusing,

Only wondered, while he thought,

Was there no one feared the losing

Of a soul the Lord had bought?

That in prison closely pent

He should stay till life was ended!

But to this would none consent.

In the cell where first they closed him,

From a window that exposed him

Sometimes to a passer’s sight,

He, the black offender, waited,

From them parted since his fall:

Once beloved, now scorned and hated

By himself, he thought by all!

Nothing asking, nothing pleading,

Moving ever here and there.

Little did his fate alarm him:

What had he to fear or shun?

What could others do to harm him

More than he himself had done?

But without were minds divided,

And the morning wore away;

Noon had come, and undecided

Though they looked so stern and fearless,

Some with sinking hearts had come, --

Hearts that wept when eyes were tearless,

Pleaded when the lips were dumb.

One who had that morning seen him,

Seeking from their gaze to hide,

Tried from heavy doom to screen him;

But his reasons were denied.

He of other days was thinking, --

Happy days, and still so near! –

When that brother, shamed and shrinking,

Had to all their souls been dear.

Others tried their hearts to harden,

Felt their pity to be sin;

Silent, prayed the Lord to pardon

Kinder thoughts that rose within.

Some proposed and some objected,

While, the long debate to end,

One old Father they expected,

And on him would all depend.

He – their honoured, best adviser—

Older than the rest, and wiser:

Many thought his words inspired;

Said he knew what passed within them

When by sin or doubt assailed;

True it is, his words could win them,

Often, when all else had failed.

He would find what all were seeking,

Pale and sober, prayed for light.

Light was sent! For, toiling slowly

Came that Father, wise and holy,

Bent beneath a weary load!

Scarce his failing limbs sustained him,

For the burden sorely pressed:

Many times, as though it pained him,

Would he stand to breathe and rest.

One who watched for his arriving,

Went and told them he was near.

Up they rose, and ceased their striving,

In their joy such news to hear!

Then they all went forth and met him,

By their reverent love compelled:

Nevermore could one forget him,

Who that day his face beheld!

Wasted, worn, yet strong to aid them;

Peaceful, though by conflict tried;

Shining with a light that made them

Feel the Lord was by his side!

But it grieved their souls to see him

By that burden bowed and strained!

Many stretched their hands to free him,

Wondering what the sack contained.

“Why this burden?” one addressed him;

He, while yet the weight oppressed him,

Answered: “These are sins of mine.

“I must bear them all, my brother,

Ever with me while I go

On my way to judge another!

These have made my journey slow.”

Then the abbot, growing bolder,

Raised the load with trembling hand

From the Father’s bended shoulder;

Looked – and found it filled with sand.

Of them all, there was not any

But was silent for a while;

For the best had sins as many

As the sand-grains in that pile!

Then they heard the abbot saying,

“God alone must judge us all!”

And a burden, heavy weighing,

Seemed from every heart to fall.

Awed and hushed, but no more keeping

Some were smiling, some were weeping;

Of their striving what remained?

Many bowed in veneration;

Others all in haste to go

With a word of consolation

To their brother fallen low.

Hope they brought, and gentler feeling,

To his torn, despairing breast,

And that evening found him kneeling

In the chapel with the rest.

None arose to judge or sentence:

He whose sin they most deplored,

In his long and sad repentance,

Was with charity restored.

Taken from ‘The Hidden Servants, and other very old stories.’  Told over again by Francesca Alexander.   Published by David Nutt, at the Sign of the Phoenix, Long Acre, London.  1911. 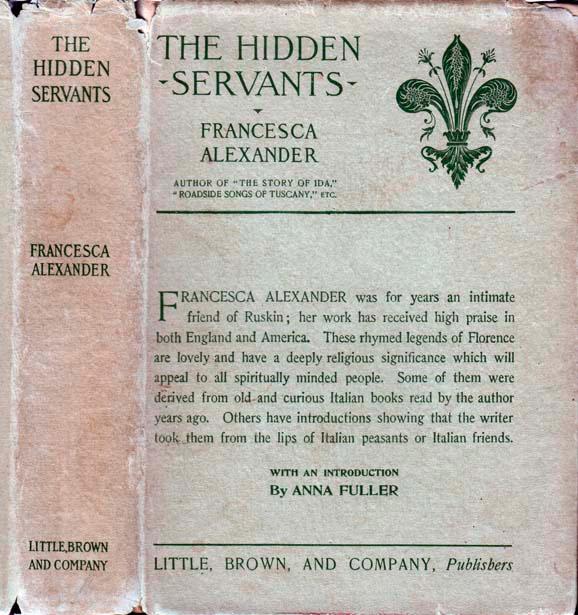 umblepie: 'The Crosses on the Wall - a legend of Primiero' by Francesca Alexander (1837 - 1917) (umblepie-northernterritory.blogspot.com)

Labels: 'The Bag of Sand' by St Heradius