Gilbert Keith Chesterton, born 1874 in London, died 1936 in Beaconsfield.
Educated at  St Pauls School, then at the Slade School of Art studying illustration.
From 1896 to 1902 he worked for London publishers Redway and Fisher Unwin. In 1901 he married Frances Blogg.   In 1902 he was given a weekly opinion column in the Daily News and in1905 a weekly column in the Illustrated London News which lasted for the next thirty years. From his teenage years he nurtured a deep interest in Christianity culminating in his conversion to the Roman Catholic faith in 1922.
Chesterton was a large man, standing 6 feet 4 inches (1.93 m) and weighing around 21 stone (130 kg; 290 lb). His girth gave rise to a famous anecdote. During World War I,  a lady in London asked why he wasn't 'out at the Front', he replied, 'If you go round to the side, you will see that I am'.  On another occasion he remarked to his friend George Bernard Shaw, 'To look at you, anyone would think there was a famine in England'. Shaw retorted, 'To look at you, anyone would think you caused it'.
Chesterton wrote around 80 books, several hundred poems, some 200 short stories, 4000 essays, and several plays. He was a literary and social critic, historian, playwright, novelist, Catholic theologian and apologist, debater, and mystery writer. He was a columnist for the Daily News, the Illustrated London News, and his own paper, G. K.'s Weekly; with his writings consistently displaying wit and a sense of humour. He employed paradox whilst at the same time making serious comments on world affairs. His best-known character is perhaps the priest-detective Father Brown.                                                                                              (Wikipedia – with thanks) 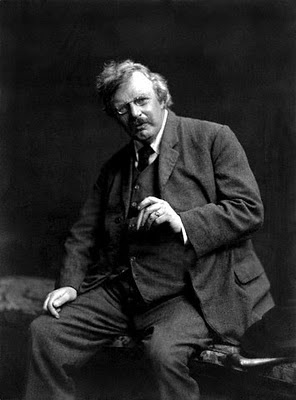 "Religious liberty might be supposed to mean that everybody is free to discuss religion. In practice it means that hardly anybody is allowed to mention it."

"Obedience.- The most  thrilling word in the world; a very thunderclap of a word. Why do all these fools fancy that the soul is only free when it disagrees with the common command? Even the mobs who rise to burn and destroy owe all their grandeur and terror, and a sort of authority, not to their anger but to their agreement. Why should disagreement make us feel free?"

Jones had a dog; it had a chain;
Not often worn, not causing pain;
But, as the I.K.L had passed
Their “Unleashed Cousins Act” at last,
Inspectors took the chain away;
Whereat the canine barked “hurray!”
At which, of course, the S.P.U.
(Whose ‘Nervous Motorists Bill’ was through)
Were forced to give the dog in charge
For being ‘Audibly at Large’.
None, you will say, were now annoyed,
Save haply Jones – the yard was void.
But something being in the lease
About “alarms to aid police,”
The U.S.U. annexed the yard
For having no sufficient guard;
Now if there’s one condition
The C.C.P.are strong upon,
It is that every house one buys
Must have a yard for exercise;
So Jones, as tenant, was unfit,
His state of health was proof of it.
Two doctors of the T.T.U.’s
Told him his legs, from long disuse,
Were atrophied; and saying “So
From step to higher step we go
Till everything is New and True”,
They cut his legs off and withdrew.
You know the E.T.S.T.’s views
Are stronger than the T.T.U.’s;
And soon (as one may say) took wing
The Arms, though not the Man, I sing.
To see him sitting limbless there
Was more than the K.K. could  bear.
“In mercy silence with all speed
That mouth there are no hands to feed;
What cruel sentimentalist
O Jones, would doom thee to exist –
Clinging to selfish Selfhood yet?
Weak one! Such reasoning might upset
The Pump Act, and the accumulation
Of all constructive legislation;
Let us construct you up a bit –"
The head fell off when it was hit:
Then words did rise and honest doubt,
And four Commissioners sat about,
Whether the slash that left him dead
Cut off his body or his head.

An author in the Isle of Wight
Observed with unconcealed delight,
A land of old and just renown
Where Freedom slowly broadened down
From Precedent to Precedent -----
And this, I think was what he meant.
GKC

*Note: Tennyson lived on the Isle of Wight for the last 40
years of his life. The lines "A land ... precedent' are from
Tennyson's "You Ask Me, Why, Tho' Ill at Ease"

When fishes flew and forests walked
And figs grew upon thorn,
Some moments when the moon was blood
Then surely I was born.

With monstrous head and sickening cry
And ears like errant wings,
The devil’s walking parody
On all four-footed things.

The tattered outlaw of the earth,
Of ancient crooked will;
Starve, scourge, deride me: I am dumb,
I keep my secret still.

Fools!  For I also had my hour;
One far fierce hour and sweet:
There was a shout about my ears,
And palms before my feet.
GKC

If trees were tall and grasses short,
As in some crazy tale,
If here and there a sea were blue
Beyond the breaking pale.

If a fixed fire hung in the air
To warm me one day through,
If deep green hair grew on great hills,
I know what I should do.

In dark I lie: dreaming that there
Are great eyes cold or kind,
And twisted streets and silent doors,
And living men behind.

Let storm-clouds come: better an hour,
And leave to weep and fight,
Than all the ages I have ruled
The empires of the night.

I think that if they gave me leave
Within the world to stand,
I would be good through all the day
I spent in fairyland.

They should not hear a word from me
Of selfishness or scorn,
If only I could find the door,
If only I were born.
GKC

I had grown weary of him; of his breath
And hands and features I was sick to death.
Each day I heard the same dull voice and tread;
I did not hate him: but I wished him dead.
And he must with his blank face fill my life –
Then my brain blackened, and I snatched a knife.

But ere I struck, my soul’s grey deserts through
A voice cried, ‘Know at least what thing you do.
‘This is a common man: knowest  thou, O soul,
‘What this thing is? Somewhere where seasons roll
‘There is some living thing for whom this man
‘Is as seven heavens girt into a span,
‘For some one soul you take the world away ---
‘Now know you well your deed and purpose. Slay!’
Then I cast down the knife upon the ground
And saw that mean man for one moment crowned.
I turned and laughed: for there was no one by ---
The man that I had sought to slay was I.
GKC
****************************"Of all modern phenomena, the most monstrous and ominous, the most manifestly rotting with disease, the most grimly prophetic of destruction, the most clearly and unmistakably inspired by evil spirits, the most instantly and awfully overshadowed by the wrath of heaven, the most near to madness and moral chaos, the most vivid with devilry and despair, is the practice of having to listen to loud music while eating a meal in a restaurant."                 GKC
Our Blessed Lady, Queen of Heaven, pray for our Church and for our Country, and guide and protect our Holy Father, Pope Benedict XVI,  particularly during  his forthcoming visit,  when we ask  God’s blessings on ourselves and our families and friends, and on all men of goodwill. We pray particularly at this special time,  for the F.SS.R Community - ‘The Sons of the Most Holy Redeemer” on Papa Stronsay, that their long awaited episcopal approbation may very soon be forthcoming, thus enabling  the ordination to the priesthood of two of their community who have completed their seminary training – for the glory of God and His Church.
St Alphonsus,  pray for them. Amen.
Posted by umblepie at 20:32 1 comment: