'Song of the Wooden-Legged Fiddler' by Alfred Noyes 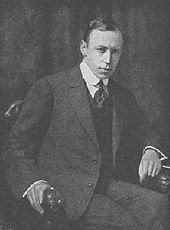 Alfred Noyes (1880-1958)
Alfred Noyes was an English poet born in Wolverhampton in 1880, died Isle of Wight 1958. He taught English Literature at Princeton University, USA, from 1914 to 1923. His first wife died in 1926 and he subsequently married a widow, Mary Angela Mayne Weld-Blundell, originally married into the recusant Catholic Weld-Blundell family, settling at Lisle Combe, near Ventnor, Isle of Wight.
Noyes was a prolific poet and writer, publishing his first collection of poems, 'The Loom Years', at aged 21. From 1903 to 1908 he published five additional volumes of poetry, including 'The Forest of Wild Thyme' and 'The Flower of Old Japan and Other Poems'.
In 1918 he followed with a short story collection 'Walking Shadows, SeaTales and Others' which included  'The Lusitania Waits', a ghost revenge tale based on the sinking of the Lusitania by a German submarine in 1915 – although the story hinges on a misconception that the submarine crew had been awarded the Goetz medal for sinking the ship.
In 1924 Noyes published another collection, 'The Hidden Player', and at the British Empire Exhibition, the same year, he wrote a series of poems set to music by Edward Elgar and known as 'Pageant of Empire'.
Alfred Noyes converted to Roman Catholicism in/about the late 1920s, and wrote about his conversion in 'The Unknown God' (1934). In his later years he suffered from increasing blindness, and in 1953 he published his autobiography 'Two Worlds for Memory'. In all he wrote about sixty books including poetry, novels, and short story collections. He died aged 77 years and is buried at Freshwater, Isle of Wight. (Wikipedia)

'Come O Holy Ghost, fill the hearts of Thy faithful and enkindle within them the fire of Thy love, send forth Thy Spirit and they shall be created, and Thou shalt renew the face of the earth'          Let us pray,
'O God Who has taught the hearts of the faithful by the light of the Holy Spirit, grant we beseech Thee, that by the gift of the same Holy Spirit, that we may be always truly wise, and ever rejoice in Thy consolation, through Christ Our Lord. Amen'
'May the Holy Spirit guide and protect our Holy Father, Pope Benedict XVI, and the One, Holy, Catholic and Apostolic Church.'
Posted by umblepie at 19:52 No comments: