Jesus was well aware that immediately after his crucifixion and death,  His followers would be filled with fear and uncertainty about the future. At that stage they did not understand why events had unfolded in the manner that they did, and it was only later through the power of the Holy Ghost , that their eyes and minds were opened.


To reinforce and strengthen the faith of His disciples, and to remove  their doubts  concerning His  resurrection from the dead, Our Lord Jesus Christ  appeared to his followers and disciples on at least ten occasions after His resurrection:-


Additionally,  St John, in his epilogue, writes of  ‘ many other signs Jesus worked in the sight of His disciples, which are not written down’. John 20 v 30


Today at Mass, the Gospel was taken from St John Ch. 21 verses 1-14. I find  this particular Gospel  especially  positive and affirmative in its message of Christ’s victory over death,  depicted by His resurrection from the dead, and His subsequent appearance to some of his closest apostles and disciples. The miracle of the catch of fish and the appearance of Christ in person sharing a meal with His apostles, a meal prepared by Christ Himself, I find truly symbolic when related to receiving Holy Communion at Mass. Of course Holy Communion is the Body and Blood of Our Lord Jesus Christ, rather than just a meal as would have been the case in the Gospel incident, nevertheless for me, the symbolism is still there. 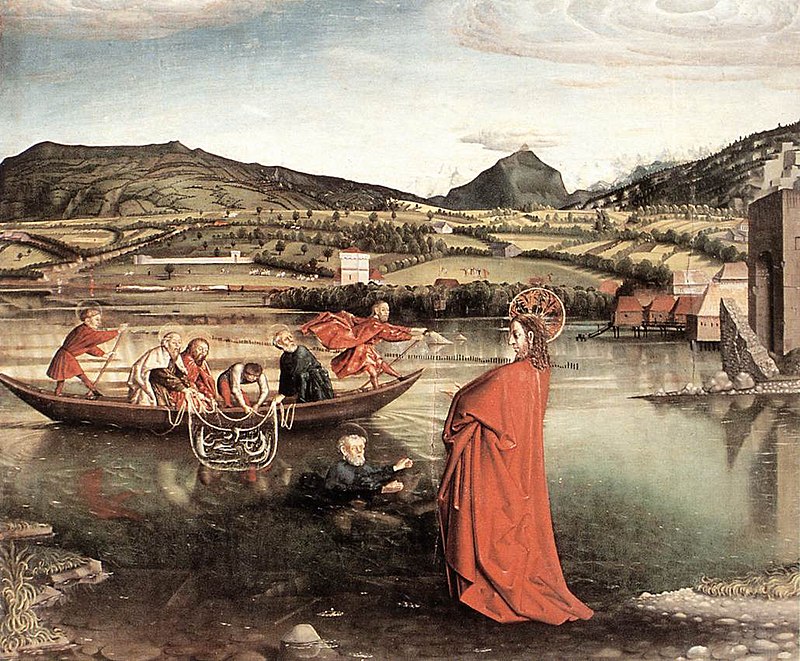 
‘At that time, Jesus showed Himself again to His disciples at the sea of Tiberias. And He showed Himself after this manner:   There were together Simon Peter, and Thomas who is called Didymus, and Nathaniel, who was of Cana in Galilee, and the sons of Zebedee, and two others of His disciples.  Simon Peter saith to them:  I go afishing.  They say to him:  we also come with thee.  And they went forth, and entered into the ship: and that night they caught nothing.  But when the morning was come, Jesus stood on the shore;  yet His disciples knew not that it was Jesus.  Jesus therefore said to them:  Children, have you nothing to eat?  They answered Him:  No.  He saith to them:  Cast the net on the right side of the ship, and you shall find.  They cast therefore, and now they were not able to draw it, for the multitude of fishes.  That disciple therefore whom Jesus loved, saith to Peter:  It is the Lord.  Simon Peter, when he heard it was the Lord, girt his coat about him (for he was naked) and cast himself into the sea.  But the other disciples came in the ship, (for they were not far from the land, but as it were two hundred cubits), dragging the net with fishes.  As soon then as they came to land, they saw hot coals lying, and a fish laid thereon, and bread.  Jesus saith to them:  Bring hither of the fishes which you have caught.  Simon Peter went up (into the ship), and drew the net to land, full of great fishes, one hundred and fifty-three.  And although there were so many, the net was not broken.  Jesus saith to them:  Come, and eat.  And none of them who were at meat durst ask Him:  Who art Thou?  knowing that it was the Lord.  And Jesus cometh, and taketh bread, and giveth them, and fish in like manner.  This is now the third time that Jesus was manifested to His disciples, after He was risen from the dead.'
Posted by umblepie at 01:38 No comments:

Labels: Christ appeared to His followers on at least ten occasions after His Resurrection
Newer Posts Older Posts Home
Subscribe to: Posts (Atom)