'Bab Ballads' by W.S.Gilbert - not all light and joy.


Sir William Schwenck Gilbert  (18 November 1836 – 29 May 1911) was an English dramatist, librettist, poet and illustrator best known for the fourteen comic operas  (known as the Savoy operas) produced in  collaboration with the composer Sir Arthur Sullivan. The most famous of these include H.M.S.Pinafore, The Pirates of Penzance, and one of the most frequently performed works in the history of musical theatre, The Mikado. These, as well as several of the other Savoy operas, continue to be frequently performed in the English-speaking world and beyond by opera companies, repertory companies, schools and community theatre groups. Lines from these works have become part of the English language, such as "short, sharp, shock”, "What, never? Well, hardly ever!", and "Let the punishment fit the crime".
Gilbert also wrote the Bab Ballads, an extensive collection of light verse accompanied by his own comical drawings. His creative output included over 75 plays and libretti, numerous stories, poems, lyrics and various other comic and serious pieces. His plays and realistic style of stage direction inspired other dramatists, including Oscar Wilde and George Bernard Shaw. According to The Cambridge History of English and American Literature, Gilbert's "lyrical facility and his mastery of metre raised the poetical quality of comic opera to a position that it had never reached before and has not reached since". (Wikipedia) 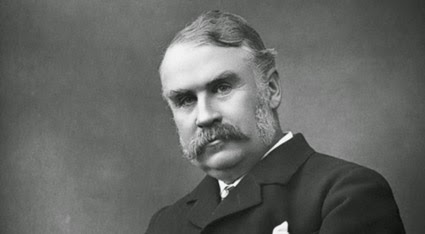 The ‘Bab Ballads’ appeared originally in the columns of “Fun”, and were subsequently republished in two volumes viz. ‘The Bab Ballads’ and ‘More Bab Ballads’. The author, WS Gilbert, was not satisfied with the finished product, and after withdrawing certain Ballads which he felt were not up to standard, arranged for those remaining to be re-published in one volume.
‘At a Pantomine’ is taken from the revised volume ‘Fifty Bab Ballads’, which is prefaced by W.S.Gilbert, 24 The Boltons, South Kensington, and dated August 1876. The numerous caricatures illustrating the Ballads were drawn by Gilbert, and signed ‘Bab’, a childhood nick-name.

An Actor sits in doubtful gloom
His stock-in-trade unfurled,
In a damp funereal dressing-room
In the Theatre Royal, World.

He comes to town at Christmas-time,
And braves its icy breath,
To play in that favourite pantomime,
Harlequin Life and Death.

A hoary flowing wig his weird
Unearthly cranium caps,
He hangs a long benevolent beard
On a pair of empty chaps.

To smooth his ghastly features down
The actor’s art he cribs, -
A long and a flowing padded gown
Bedecks his rattling ribs.

He cries, “Go on – begin, begin!
Turn on the light of lime –
I’m dressed for jolly old Christmas, in
A favourite pantomime!”

The curtain’s up – the stage all black –
Time and the year nigh sped-
Time as an advertising quack –
The Old Year nearly dead.

The wand of Time is waved, and lo!
Revealed Old Christmas stands,
And little children chuckle and crow,
And laugh and clap their hands.

The cruel old scoundrel brightens up
At the death of the Olden Year,
And he waves a gorgeous golden cup,
And bids the world good cheer.

The little ones hail the festive King, -
No thought can make them sad.
Their laughter comes with a sounding ring,
They clap and crow like mad.

They only see in the humbug old
A holiday every year,
And handsome gifts, and joys untold,
And unaccustomed cheer. 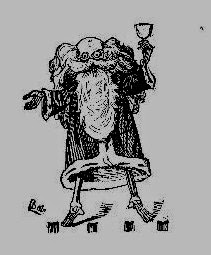 The old ones, palsied, blear, and hoar,
Their breasts in anguish beat –
They’ve seen him seventy times before,
How well they know the cheat!

They know Old Christmas well, I ween,
Those men of ripened age;
They’ve often, often, often seen
That Actor off the stage!

They see in his gay rotundity
A clumsy stuffed-out dress –
They see in the cup he waves on high
A tinselled emptiness.

Those aged men so lean and wan,
They’ve seen it all before,
They know they’ll see the charlatan
But twice or three times more.

And so they bear with dance and song,
And crimson foil and green,
They wearily sit, and grimly long
For the Transformation Scene. 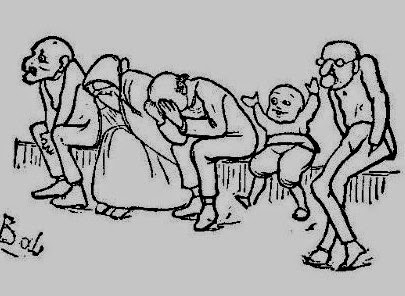 Ack  ‘Fifty Bab Ballads’ by W S Gilbert
Although famous for his wit and light-hearted humour, Gilbert had a darker side to his character which I think is well illustrated by the above Ballad. He was a realist and was not afraid to express views which could be socially and politically unpalatable. He received his early education in France, and his later education at Kings College, London. In 1856 he joined the Civil Service employed as an Assistant Clerk in the Privy Council Office, remaining there for nearly four years, apparently hating the job. From 1859 to 1874 he joined the Militia – a military organisation formed for the defence of the realm, as a part-time volunteer, ending up with the rank of Captain. At the same time and for only a few months, he practised as a Barrister, after which his ability as a writer, reviewer, and illustrator, brought him increasing patronage. In 1863 he professionally produced his first play, and during the following six years he produced opera burlesques, farces, and pantomimes. From 1869 to 1875 he, with Thomas German Reed, was fully involved in theatrical reform, producing family entertainment and comedies 'suitable for young ladies', in contrast to the then current vogue in Victorian burlesque. In 1875 his operetta Trial by Jury was performed in London as a back-up to a major opera, and proved a great success. In 1877 the theatrical impresario Richard D’Oyly Carte founded the D’Oyly Carte Comedy Co., and during the next twelve years the Savoy Operas, comprising all of Gilbert’s major operettas, were performed to great acclaim, both national and international. In 1889 Gilbert was responsible for the building of the Garrick Theatre in London. His long standing professional relationship with the composer Arthur Sullivan, with whom the Savoy Operas had been so successfully created, deteriorated in the early 1890s. His operettas continued to flourish and grow in popularity, and whilst new works were few, Gilbert was fully occupied in directing and advising on new productions of the Savoy operas. He was appointed a Justice of the Peace, and in 1907 was knighted. He died in 1911 having suffered a heart attack whilst trying to rescue a young woman who had fallen into the lake adjoining his house. 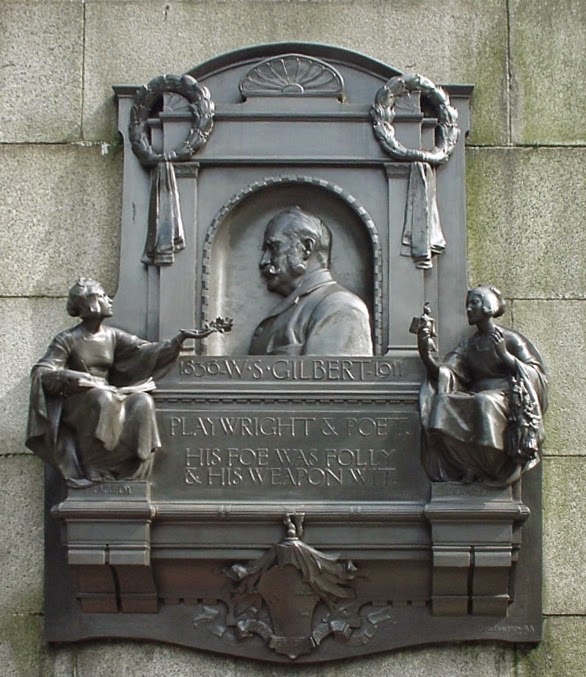 In contrast to the rather somewhat depressing effect of the above Ballad, I would like to finish on a rather lighter and brighter note with a short poem by Joyce Falkner.

A Star for the Christ Baby's birthday,
The Moon for His Mother the Maid,
And the Sun for the light of God's mercy
As the new dawn disperses night's shade.

Today is the day of the children,
The feast of the wonder of birth,
Of the innocent, weak, and dependent
Brought forth to replenish the earth.

And how will our children be living
In the world we're now helping to plan?
Do we teach them not grabbing, but giving?
To praise God by caring for man?

Have we faith that these little ones, maybe,
By the Star and the Moon and the Sun
Will create in the name of that Baby
A world fairer, more kind than we've done. 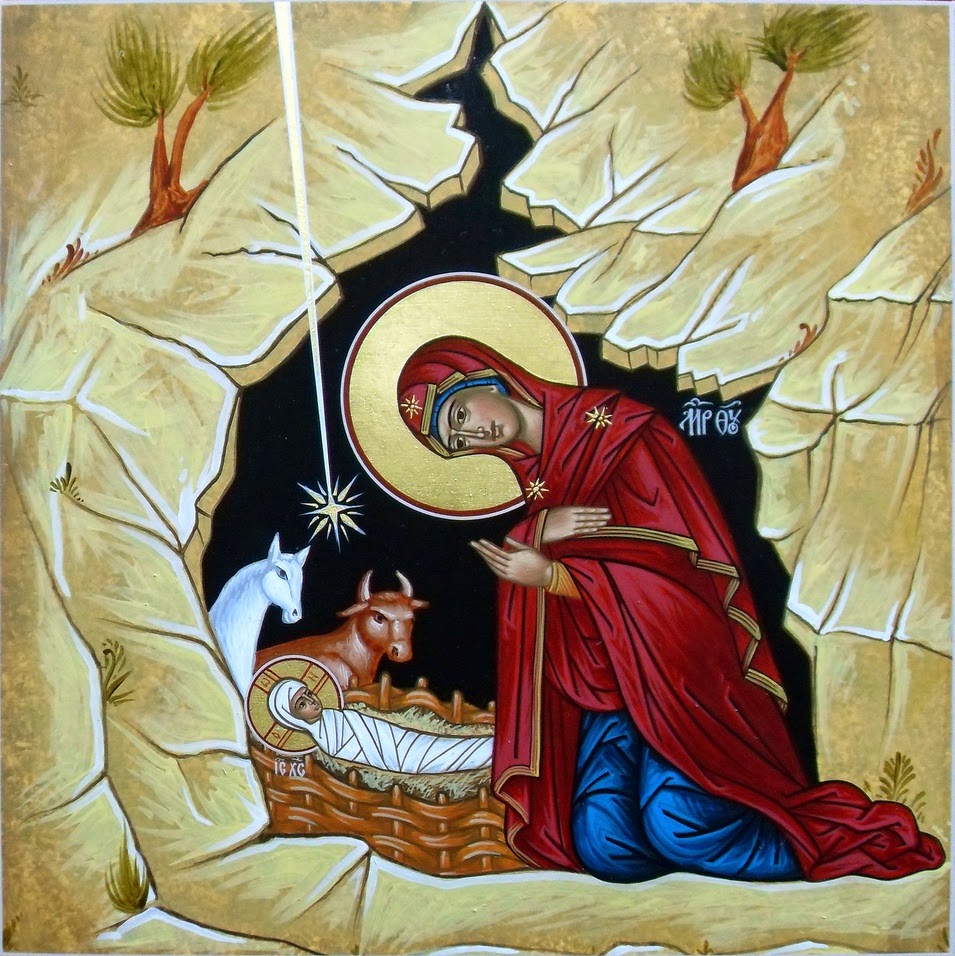 Christ is born! Give Him glory! Christ came from Heaven! Greet Him all!

Posted by umblepie at 21:20 No comments: