'The Spirit of Meekness is peculiar to God'


This article is taken from the writings of St Alphonsus Maria de Liguori  (1696-1787),  founder of the  ‘Congregation of the Most Holy Redeemer’,  known as the ‘Redemptorists’. It is taken from his book ‘The Holy Eucharist’,  being volume VI of ‘The Ascetical Works’, considering  the ‘Practice of the love of Jesus Christ’, and concentrating in this case on the specific virtue of meekness.

'He that loves Jesus Christ loves meekness'.
The spirit of meekness is peculiar to God:  ‘My spirit is sweet above honey’. Hence it is that a soul that loves God loves also all those whom God loves, namely, her neighbours; so that she eagerly seeks every occasion of helping all, of consoling all, and of making all happy as far as she can.  St Francis de Sales, who was the master and model of holy meekness, says, “Humble meekness is the virtue of virtues, which God has so much recommended to us; therefore we should endeavour to practise it always and in all things.”  Hence the saint gives us this rule:  “What you see can be done with love, do it; and what you see cannot be done without offence, leave it undone.” He means, when it can be omitted without offending God; because an offence of God must always and as quickly as possible, be prevented by him who is bound  to prevent it


This meekness should be particularly observed towards the poor, who by reason of their poverty, are often harshly treated by men.  It should likewise be especially practised towards the sick who are suffering under infirmities, and for the most part meet with small help from others. Meekness is more especially to be observed in our behaviour towards enemies: Overcome evil with good.  Hatred must be overcome by love,  and persecution by meekness; and thus the saints acted, and so they conciliated the affections of their most exasperated enemies. 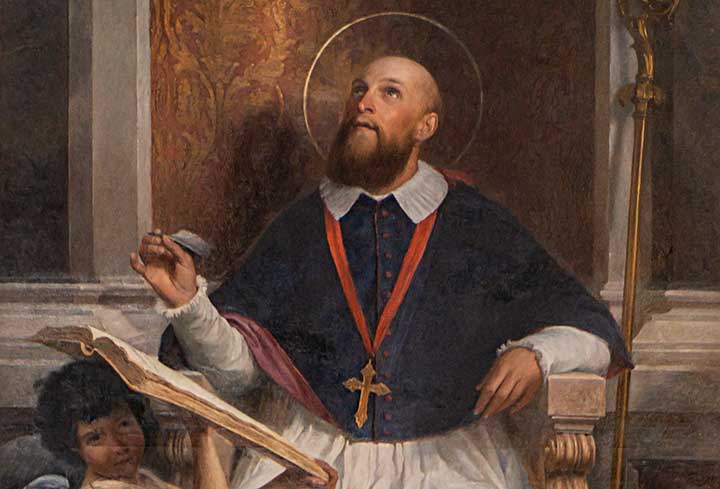 
“There is nothing” says St Francis de Sales, “ that gives so much edification to our neighbour as meekness of behaviour.” The saint, therefore, was generally seen smiling, and with a countenance beaming with charity, which gave a tone to all his words and actions.  This gave occasion to St Vincent de Paul to declare that he never knew a kinder man in his life.  He said further, that it seemed to him that in his lordship of Sales was a true likeness of Jesus Christ.  Even in refusing what he could not in conscience comply with, he did so with such sweetness, that all, though unsuccessful in their requests, went away satisfied and well disposed towards him.  He was gentle towards all, towards Superiors, towards equals and inferiors, at home and abroad; in contrast with some, who, as the saints used to say, “seemed angels abroad, but were devils at home.” Moreover, the saint, in his conduct towards servants, never complained of their remissness; at most he would give them an admonition, but always in the gentlest terms.  And this is a thing most praiseworthy in Superiors.


The Superior should use all kindness towards those under him.  When telling them what they have to do, he should rather request than command.  St Vincent of Paul said: “A Superior will never find a better means of being readily obeyed than meekness.”  And to the same effect was the saying of St Jane Frances of Chantal: “I have tried various methods of governing, but I have not found any better than that of meekness and forbearance.”


And more than this, the Superior should be kind even in the correction of faults.  It is one thing to correct with firmness and another with harshness; it is needful at times to correct with firmness, when the fault is serious, and especially if it be repeated after the subject has already been admonished of it; but let us always be on our guard against harsh and angry correction; he that corrects with anger does more harm than good.  This is that bitter zeal reproved by St James. Some make a boast of keeping their family in order by severity, and they say it is the only successful method of treatment; but St James speaks not so: ‘But if you have bitter zeal …… glory not’.  If on some rare  occasion it be necessary to speak a cross word, in order to bring the offender to a proper sense of his fault, yet in the end we ought invariably to leave him with a gentle countenance and a word of kindness.  Wounds must be healed after the fashion of the Good Samaritan in the Gospel, with wine and oil:  “But as oil” said St Francis de Sales, “always swims on the surface of all other liquors, so must meekness prevail over all our actions.”  And when it occurs that the person under correction is agitated, then the reprehension must be deferred till his anger has subsided, or else we should only increase his indignation. The Canon Regular St John said, “When the house is on fire, one must not cast wood into the flames.”


‘You know not of what spirit you are’.  Such were the words of Jesus Christ to his disciples James and John, when they would have brought down chastisements on the Samaritans for expelling them from their country.


Ah, said the Lord to them, and what spirit is this? This is not my spirit, which is sweet and gentle; for I am come not to destroy but to save souls: The Son of Man came not to destroy souls, but to save. And would you induce me to destroy them? Oh, hush! And never make the like request to me, for such is not according to my spirit.  And, in fact, with what meekness did Jesus Christ treat the adulteress? ‘Woman,’ said He, ‘hath no man condemned thee? Neither will I condemn thee! Go and now sin no more.’  He was satisfied with merely warning her not to sin again, and sent her away in peace.  With what meekness, again, did He seek the conversion of the Samaritan woman, and so, in fact, converted her.  He first asked her to give Him to drink; then He said to her: ‘If thou didst know who He is that saith to thee, Give me to drink’; and then he revealed to her that he was the expected Messiah.  And, again, with what meekness did he strive to convert the impious Judas, admitting him to eat of the same dish with him, washing his feet and admonishing him in the very act of his betrayal: Judas and dost thou thus betray me with a kiss? Judas, dost thou betray the Son of Man with a kiss?  And see how he converted Peter after his denial of him! ‘And the Lord turning looked on Peter.  On leaving the house of the high priest, without making him a single reproach, he cast on him a look of tenderness, and thus converted him; and so effectually did he convert him, that during his whole life long Peter never ceased to bewail the injury he had done to his Master.


Oh, how much more is to be gained by meekness than by harshness!  St Francis de Sales said there was nothing more bitter than the bitter almond, but if made into a preserve, it becomes sweet and agreeable: thus corrections, though in their nature very unpleasant, are rendered pleasant by love and meekness, and so are attended with more beneficial results.  St Vincent of Paul said of himself, that in the government of his own congregation he had never corrected anyone with severity, except on three occasions, when he supposed there was reason to do so, but that he regretted it ever afterwards, because he found it turned out badly; whereas he had always admirably succeeded by gentle correction.


St Francis de Sales obtained from others whatever he wished by his meek behaviour; and by this means he managed to gain the most hardened sinners to God.  It was the same with St Vincent of Paul, who taught his disciples this maxim: “Affability, love, and humility have a wonderful efficacy in winning the hearts of men, and in prevailing on them to undertake things most repugnant to nature.” ……..


Kindness should be observed towards all on all occasions and at all times.  St Bernard remarks that certain persons are gentle as long as things fall out to their taste; but scarcely do they experience some opposition or contradiction than they are instantly on fire, like Mount Vesuvius itself.  Such as these may be called turning coals, but hidden under the embers.  Whoever would become a saint, must, during this life, resemble the lily among thorns, which, however much it may be pricked by them, never ceases to be a lily; that is, it is always equally sweet and serene.  The soul that loves God maintains an imperturbable peace of heart; and he shows this in her very countenance, being ever mistress of herself, alike in prosperity and adversity, according to the lines of Cardinal Petrucci:


“Of outward things he views the varying guise,


While in his soul’s most inward depth

Whenever it happens that we have to reply to someone who insults us, let us be careful to answer with meekness: a mild answer breaketh wrath. A mild reply is enough to quench every spark of anger. And in case we feel irritated, it is best to keep silence, because then it seems only just to give vent to all that rises to our lips; but when our passion has subsided, we shall see that all our words were full of faults.

And when it happens that we ourselves commit some fault, we must also practise meekness in our own regard. To be exasperated at ourselves after a fault is not humility, but a subtle pride, as if we were anything else than the weak and miserable things that we are.  St Teresa said: “The humility that disturbs does not come from God, but from the devil”.  To be angry at ourselves after the commission of a fault is a fault worse than the one committed, and will be the occasion of many other faults; it will make us leave off our devotions, prayers, and communions; or if we do practise them, they will be done very badly.  St Aloysius Gonzaga said that we cannot see in troubled waters, and that the devil fishes in them. A soul that is troubled knows little of God and of what it ought to do.  Whenever, therefore, we fall into any fault, we should turn to God with humility and confidence, and craving his forgiveness, say to him with St Catharine of Genoa: O Lord, this is the produce of my own garden! I love Thee with my whole heart, and I repent of the displeasure I have given Thee! I will never do the like again: grant me Thy assistance!” 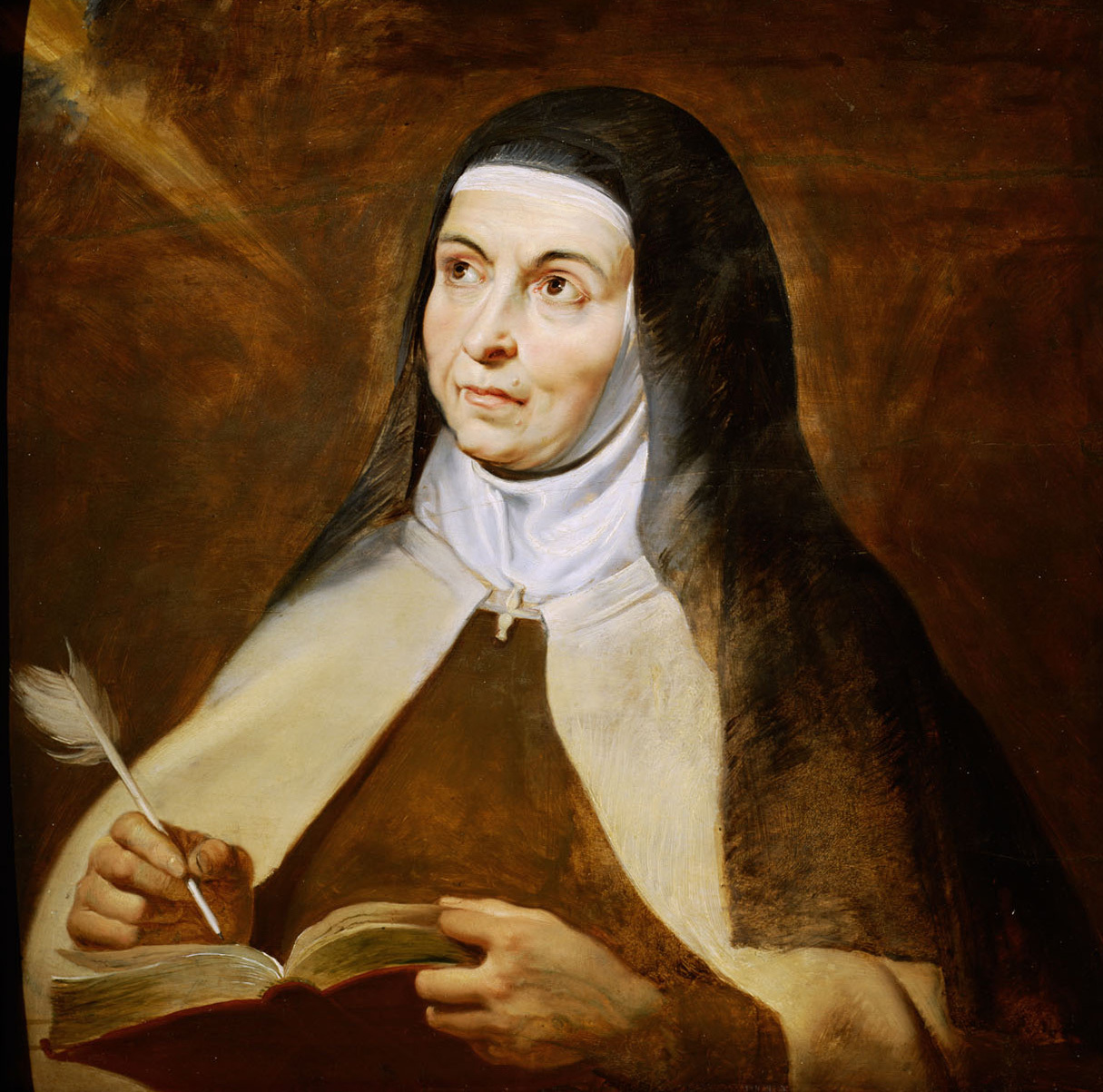