The above words of GK Chesterton are as valid today as they were when first written.

'Same-sex marriage' has been approved by the UK Parliament, but is still being considered by the Scottish government. We hope that proper consideration is given to the rights of those who are opposed to this legislation, particularly in the field of employment. It seems that employees, especially in the public sector, could find themselves discriminated against if they don’t endorse the new definition of marriage. Teachers, social workers, the police and especially civil registrars are among those who could be particularly vulnerable.  There have already been examples of extreme intolerance shown to certain people, such as the former SNP leader Gordon Wilson who was voted off the board of Dundee Citizens Advice Bureau for publicly endorsing traditional marriage. Also the case of the Rev Brian Ross, a Church of Scotland Minister, and Chaplain of the Strathclyde Police, forced to resign for the same reason.
A belief in traditional marriage must never be used to dispute someone’s commitment to diversity and equality. It should therefore be stated clearly on the face of the Bill that the view that marriage can only be between a man and a woman is “worthy of respect in a democratic society” – which is a key test used by the European Court of Human Rights. ( ack.Scotland for Marriage) 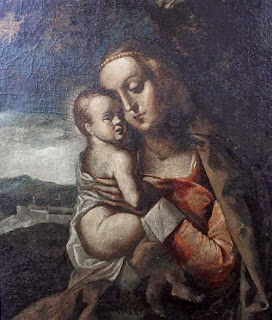 Mary, Mother of God and mother of mercy, pray for us

Is this a foretaste of our new tolerant world?
The following extract is from the website  'turtlebay and beyond', (see link on my sidebar), and needs no explanation:-

With the gay lobby pushing for new 'anti-discrimination' legislation at EU level, it becomes increasingly clear that the predominant purpose of such legislation would be for gay bigots to bully and harass all the rest of society.
EU law makers should take a close look at the United Kingdom, where the owners of a Bed & Breakfast have to pay a high price for having refused a twin bed room to gay couple Martyn Hall and Steven Preddy. Hazelmary and Peter Bull, who run Chymorvah Hotel at Marazion, Cornwall, have also faced death threats over their decision to in 2008 have no option but to sell their beloved home and business after failing to attract enough custom and paying their legal costs after high profile court cases over the issue. 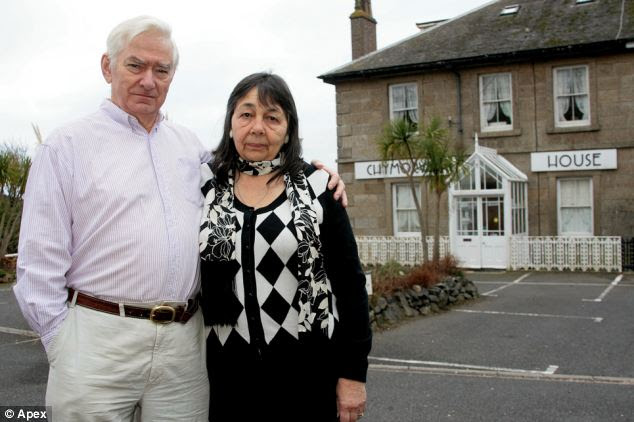 No way forward: Hazelmary and Peter Bull say they can't face another winter like last year when they went 'cold and hungry' because of money worries (copyright: the Daily Mail)
But it is not only the lost court case that forces them to close their business. According to a report in the Daily Mail, the Bulls have gone through a year of organised hate crime from mostly anonymous enforcers of the new moral order. They have received death threats, vandalism and had their website corrupted with pornography They have had the bolts removed from the wheels of their car and most recently found a dead rabbit nailed to their fence all over the issue of who they allow to stay in their guesthouse.
Isn’t it strange how legislation that purportedly aims to promote “tolerance” is actually used to bully and harass, and to destroy the economic and social existence of an elderly couple whose sole “mistake” was to believe in the sanctity of marriage? And isn’t it revelatory how some in the gay community,  so squeamish about so-called “hate crimes” of which they claim to be victims, themselves appear to indulge in the very behaviour that they condemn?
In the EU, the debate over the proposed “Anti-Discrimination Directive” is far from over. However, the probable effects of such legislation can now be studied in the UK: it would effectively cancel out contractual liberty for all and everyone. And that is nothing less than an assault on liberty at large, given that the conclusion of contracts is one of the most important ways in which people interact socially. Limitations of the freedom of contract can therefore only be justified where otherwise people would be cut off from goods and services of primary necessity. But this was not the case here: firstly, it is not a primary necessity for homosexual couples to spend a weekend in a given B&B in Cornwall. Secondly, there were plenty of other hotels in the area that would have accomodated them. Thirdly, there was no risk for them to spend the night in the cold, given that even the owners of the Chymorvah hotel would have accomodated them, albeit in two single rooms.
So, what is this all about? The true purpose of this type of legislation is not to guarantee access to life-necessary goods and services, but to provide a legal  basis for bigotry and bullying. And the bigots and bullys that use it are from the gay community.

*****************
'Thoughts from St Alphonsus for every day in the year.' by Rev C Mcneiry CssR.
'If after this life there were neither hell nor heaven, could Christians think less of these places than they do at present? It is this forgetfulness that makes them lead so wicked a life.  My brother, if you wish to live well, spend the remaining days of life with death before your eyes.'      (September 27th)
Posted by umblepie at 12:34 No comments: