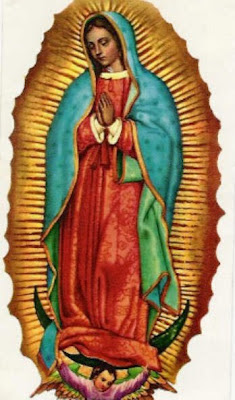 With the Holy Father currently visiting Mexico, a country of which I  know nothing, I thought it time to learn a little about it.


Mexico, officially the ‘United Mexican States’, is a federation comprising thirty-one states and a Federal District, with a total area of 761,606 sq. miles, making it the world's 14th largest country by area. 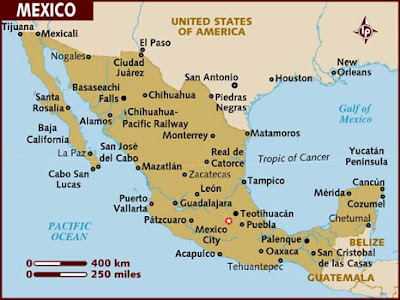 Legislation is based on the ‘1917 Constitution’ formulated as a result of the Mexican Revolution and ensuring  powerful control of the Church by the State,  including the banning of public Masses and religious garb, and  the wholesale  elimination of every aspect  of Catholic education. It capped a century of setbacks for the church, which had enjoyed a government-imposed monopoly of faith for most of the 300 years following Spain's conquest of Mexico in 1521. The revolutionary impositions  sparked the 'Cristero War' of 1926-29 in which tens of thousands of Catholics died  opposing  oppressive State anti-religious laws and violent persecution. The anti-Catholic Constitution remained in force throughout the 20th century, with  religious education outlawed and replaced by  government Marxist/socialist teaching, and  state control of church property and lands. Occasional and gradual  relaxation of the party line were revealed by such events as the open-air Masses and meetings celebrated on the visit of Pope John Paul II in 1980 and 1990. The past decade has seen a more 'conservative' government in power, with a corresponding improvement in Church/State relations. 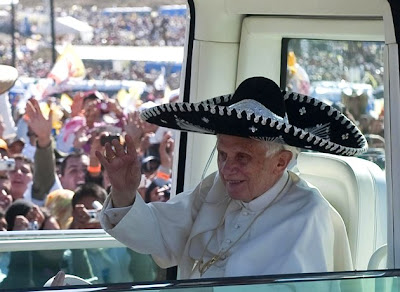 In spite of decades of religious oppression and interference by the State,  the 2010 census reveals that of the over 112 million population, 82% are of the Roman Catholic faith, with 42% attending Mass weekly. The nearly 93 million Catholics, constitute in absolute terms, the second largest Catholic community in the world after Brazil.  The country is divided into 90  dioceses and there are 15,700 priests and 46,000 men and women in religious orders. The Metropolitan provinces were rearranged on 25 November 2006.


Mexico has one of the world's largest economies, and is categorised by the World Bank as a  newly emerging industrialised country and an emerging power. Great disparity exists between rich and poor, with earnings of  rural workers only 30% that of comparable workers in urban areas, with approximately 46% of the population - 52 million persons, living in extreme or moderate poverty. Mexico is the largest North American car-producing nation, surpassing both Canada and the U.S; and the last decade  has seen enormous growth in the electronics industry providing strong competition to the markets of S.E.Asia. 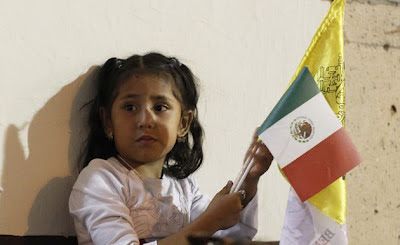 I have recently been reading a book entitled ‘Red Mexico’ written by  Captain Francis McCullagh, based on his experiences in 1928 in Mexico, the time of the ‘Cristero War’, in which Catholics - particularly the clergy and  young men and women, were arrested and executed without trial, solely because of their  faith. Francis McCullagh, an ex-soldier, journalist and Catholic, had previously visited Russia to see for himself the horrors of the Bolshevik revolution. In this book he equates his experiences in Mexico with those in Russia, seeing diabolical influences in both.
Below is an extract from ‘Red Mexico’; the author has been talking to Senor X, a leader of the local  A.C.J.M. organisation, in permanent hiding from the State police:-

“Of all the histories of Saints which Senor X told me that night in a hiding place close to the Prefecture of Police (and all the more likely, therefore, to escape suspicion), the most touching was about a gentle, innocent, and quite unworldly pair,  Joaquin Silva and Manuel Melgarejo, two martyrs whose names are as well known among Mexican Catholics as the name of Edmund Campion was among Elizabethan Catholics.   Silva was 27 years of age at the time of his death and Malgarejo 17.

On 6th September 1926 both left Mexico City for Zamora on a vague pilgrimage of protest and propaganda against the anti-religious legislation of Calles, but without weapons, money, luggage, or military plans.  “Con el intento de trajabar  por la santa causa de cla Iglesia” ("Something of the good old Spanish style about this"). It was just such a pilgrimage as St Francis of Assisi might have undertaken with a companion as simple, frank, pious, outspoken and unworldly as himself; and Silva, whose whole life had been like that of St Francis,  uttered from time to time remarks filled with strange significance, remarks which might have dropped from the lips of ‘il Poverello’ himself.  These remarks are treasured up today in the heart of the Mexican people, and the young man who uttered them is revered as a Saint.

Such a simple pair could not well escape detection; and it was not long before an agent of Calles had ingratiated himself with them and wormed out of them the fact that they belonged to the A.C.J.M.(Catholic Association of Mexican Youth).  This agent was a General, no less, his name was Zepeda.  He posed as a pious Catholic, and on the pretence of showing them scars on his breast, he let them see as if by accident, that he wore a number of religious medals around his neck.  Soon afterwards, this aged Judas threw off the mask and said: “Amigos, estan ustedes perdidos: los tenemos presos” (“Friends, you are lost.  You are our prisoners”).   To which Joaquin replied: “As to me, kill me or do what you like with me, but as for this youth who is only seventeen years old, let him go free.”  But Melgarejo would not have it so.  “No, Joaquin,” he said, “I wish to die with thee.” 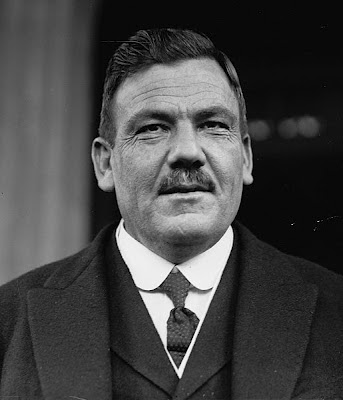 General Tranquilino Mendoza, the G.O.C. in Zamora, offered to set them free if only they promised to cease their propaganda work and to leave the A.C.J.M.,  but they refused and were condemned to death.  On hearing sentence passed on him, Silva remarked, quite simply, that on entering the presence of God, he would pray for General Mendoza and General Zepeda.

They were brought from the barrack where they had been imprisoned to the cemetery, for, save in Mexico City, shooting is almost always carried out in the cemetery, beside an open grave.

Silva refused to have his eyes bandaged.  “Do not cover my eyes,” he said, “I am not a criminal. I myself will give you the signal to fire.  When I say ‘Viva Cristo Rey!  Viva la Virgen de Guadalupe! (Hail Christ the King! Hail Virgin of Guadalupe!) then you can fire.”

In some respects the Mexican Army is very peculiar, for against this extraordinary arrangement the O.C. firing party had nothing to say, and a condemned man is never handcuffed or prevented from talking as much as he likes.

Silva certainly talked a good deal, but every word went home, for he talked like one who sees the true value of things and does not judge life and death by the standards of the ordinary man.  When he told the members of the firing party that he forgave them and would pray for them, one of the soldiers was so overcome by emotion, that he threw away his rifle saying ‘Yo no tiro joven, yo pienso com ousted, yo soy catolico’ (I will not fire, young man. I think as you do. I am a Catholic.)  This soldier was shot on the following day. 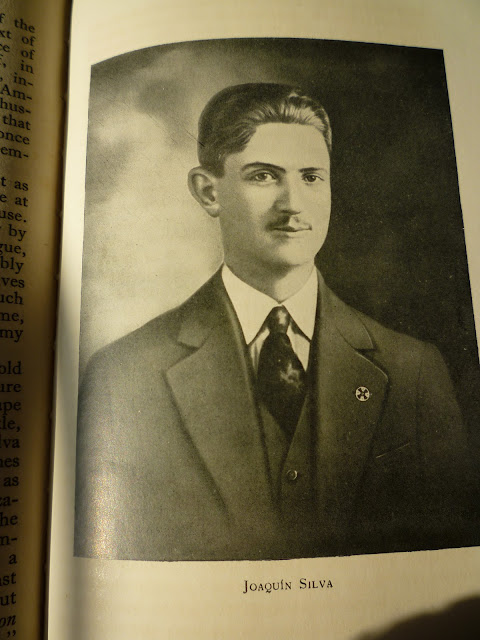 When the last moment of Silva had come nigh, and he could see the muzzles of the five rifles facing him at ten paces distant, he turned suddenly to Melgarejo and said: “Descubrete, porque vamos a comparecer delante de Dios” (“Take off your hat, for we are going to appear before God”), then, addressing the firing party, he cried, “Viva Cristo Rey! Viva la Virgen de Guadalupe!” whereupon the soldiers fired, and he fell dead, pierced by all of the five bullets.  On seeing this, Melgarejo tumbled to the ground in a swoon, and the soldiers killed him before he had regained consciousness.

Senor X gave me a list of apparently miraculous cures that have been wrought through the intercession of Joaquin Silva; and Joaquin’s brother Jose Silva, who lives in the United States, says that at the very moment of the execution he distinctly heard his own name called by a voice which he at once recognised as Joaquin’s. At that time he did not even know that Joaquin had been arrested.

For several nights in succession I met Senor X and he introduced me to other members of the A.C.J.M.  They were all between twenty and thirty years of age, but nearer as a rule, to twenty than to thirty; and they were the best types of Mexican youth that I had yet met.  I even found my way into the circle wherein moved the martyrs whose arrest I will later describe. I am glad that I did so for I was thus placed in a position to contrast the snow-white innocence, the untiring industry and the Christian charity of these young men,  with the dark background of crime and hatred and blood against which four of them moved, like Angels passing the mouth of Hell, when on the 23rd November 1927, they crossed the garden of the Prefecture of Police on their way to death.

As for Senor X, he himself suddenly disappeared one day as completely as if the ground had opened up and swallowed him; and taking into consideration all the circumstances that surrounded his disappearance, I came to the conclusion that he had gone to join his young disciples, Silva and Melgarejo."

Our Lady of Guadalupe, guide and protect our Holy Father, Pope Benedict XVI
Posted by umblepie at 17:19 No comments: