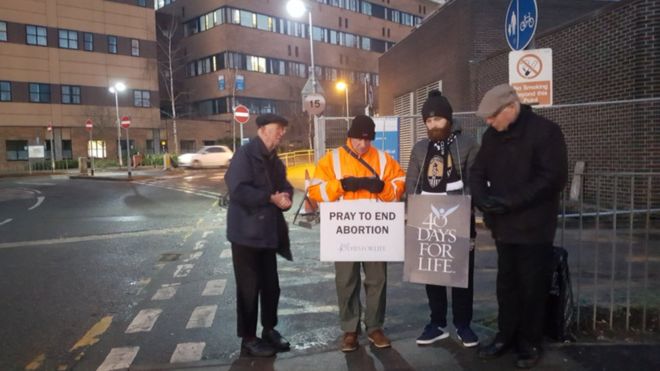 ‘The activists intend to take part in a “prayer vigil” outside the hospital for 40 days’
(BBC Nottingham.)

In the last day or two the BBC has highlighted details of the witness of members of the ’40 Days for Life’, a pro-life, anti-abortion Christian organisation, who are keeping a prayer  vigil outside the Queens Medical Centre, Nottingham, during the 40 days of Lent.
************
John Edwards, from Nottingham 40 Days for Life, said the group was "always peaceful".
"40 Days for Life is a vigil of prayer, not a protest. We pray - for the unborn, and for their mothers, who are also harmed by abortion," he said.
"If anyone approaches us, we will talk to them, and can direct women to sources of support to help them keep their baby if that is what they wish. Many women around the country have been helped by such vigils."
The movement claims to help women by showing them an alternative to abortion, and claims many women have been grateful for their presence outside clinics.
The action has been timed to coincide with Lent and it is the third year in a row that it has taken place in Nottingham.
They intend to be there every day, with different activists signing up for "vigil hours".
The BBC asked to speak to some of these women, but 40 Days for Life has not provided any contact details. 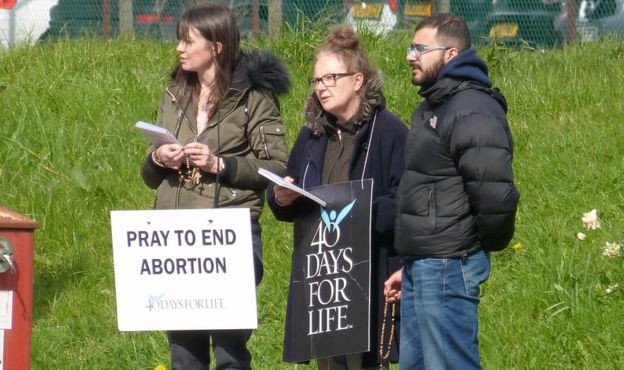 In November, Home Secretary Amber Rudd ordered an assessment of protests outside abortion clinics following concerns about the tactics of some "aggressive" protesters.
However, researchers into this type of activism have said it is a form of street harassment that is "incredibly intimidating and distressing".
The hospital said the activists had previously caused "distress".

Councillor Nick McDonald, portfolio holder for adults and health, said:-
"We will repeat, we fully support the trust's stance on this issue, and for our part we will not put up with Nottingham residents, whether staff or patients, being intimidated or harassed as has happened in previous years."
Before the demonstration began, Tracy Taylor, chief executive of Nottingham University Hospitals NHS Trust, said: "Previous protests by this group have caused very considerable distress to patients, visitors and staff, which we are not prepared to allow to happen again.” 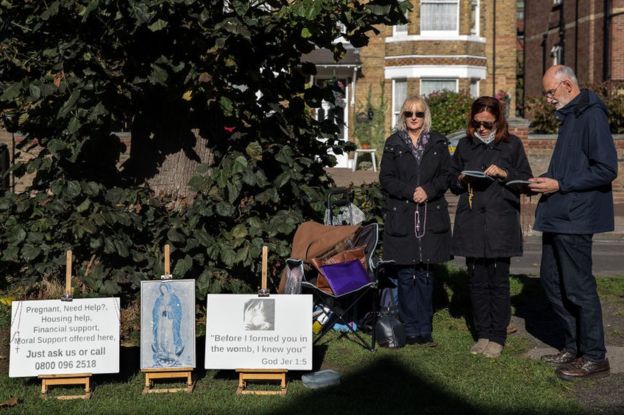 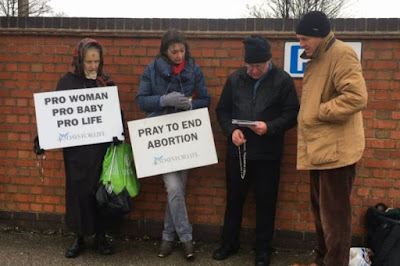 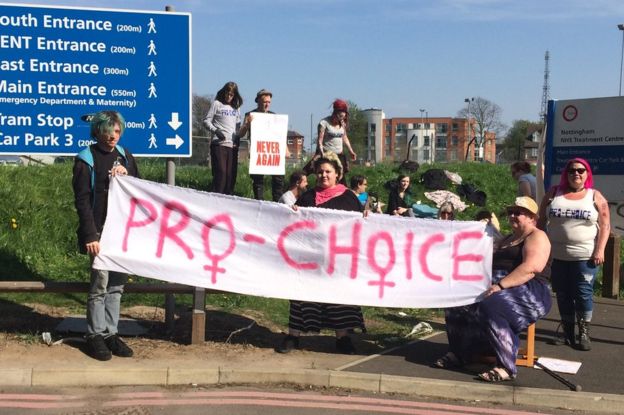 Rachel Strong, an activist with Pro-Choice Nottingham, took part in counter demonstrations in 2017 and campaigned to stop 40 Days for Life from going on the hospital site again.
"A small group of us were quite horrified by what they were doing because we are aware that it's really intimidating for anybody accessing reproductive healthcare to have to walk past these kinds of vigils, these kinds of demonstrations," she said.
The trust has said it does not support "any protest, on any matter that impacts adversely on our patients, visitors and staff".
********************
A few observations - the photographs.

A picture is worth a thousand words.  The photographs of the ’40 Days for Life’ supporters, the largest of the groups being four persons, show prayerful and devout people, mostly middle-aged men and younger women, some praying the rosary, with small  banners,  ‘Pray to end abortion’ or ’40 days for Life’, thereon, all standing quietly and peacefully. Each photograph represents a different year, so that in any one year there were never more than a handful of people witnessing and praying for this end. Hardly an ‘incredibly intimidating and distressing’ scene. These people constituted  a tiny group  praying for justice, for the rights of unborn children, as acclaimed under International Law, to be born alive. They are courageous and steadfast in their Christian beliefs, prepared to stand-up peacefully and without aggression to the evil of abortion, and to  offer practical help to those women who want to keep their unborn child. To these they are truly messengers of life and of hope.

We only show one photograph of ‘Pro-Choice’ supporters,  numbering  about twelve and  comprising mostly youngish women, some wearing  jeans with an emblazoned ‘pro-choice’ top. They display a large 'Pro-Choice' banner which leaves no doubt of their identity and purpose, the scene all too familiar as representing the ‘pro-Choice’ brigade, so many of whom seem determined to facilitate and even encourage abortion. It is not fair to label all within the 'pro-Choice' camp, as anti-life, however the actions of so many under the 'pro-Choice' banner suggest a corporate mentality offering little or no genuine sympathy for the unborn child and the mother, no time for those who dare oppose their agenda, and no love nor fear of Christ, the author of all life, and by Whom one day soon we will all be judged.
on the BBC report.

In fairness to the reporter, I think that she has done her best to be objective and unbiased, whether the same can be said for those she interviewed is a matter of opinion.
The choice and implication of certain words and phrases are worth considering.
1. The heading  “Anti-abortion group ‘40 days for Life’ targets Queens Medical Centre” – suggests  a reasonable sized gathering of active protesters. In fact, according to the published photographs, the group consisted of three or four people, all of whom were peaceful and prayerful, standing together with two or three small placards visible.
2. “The BBC has asked to speak to some of these women (who have been grateful for the help provided by the pro-life group) but’ 40 days for life’ has not provided any contact details”. Clearly such information would be absolutely confidential, and the motive for including this in the report seems unnecessary and questionable.
3. The constant use of the words ‘activist’, ‘harassment’, ‘distress’, used in a context which suggests social disruption on a quite serious scale, paints a significantly distorted  picture.
4. If such disorder had occurred previously, why did the ‘authorities’ fail to act by calling the police or some similar action. The law covers such incidents, but was not used; perhaps such incidents were more imaginary than real, or of less consequence than implied.
5. The phrase 'before the demonstration began' - immediately preceding photograph 3. But what demonstration? This is a prayer vigil, not a demonstration. Another example of distorted imagery.

Reading the BBC’s report, it would seem that this whole matter has been blown out of all proportion by persons wishing to curtail  positive and practical help to pregnant women and their unborn children. The complainants  consist of NHS and hospital administrators, and local politicians perhaps keen to hit the headlines? But where and who are the women who have allegedly suffered such harassment and distress? Of course it may be that they are embarrassed about coming forward, which is perhaps understandable, nevertheless they are rather conspicuous by their silence, bearing in mind the alleged harassment and distress they suffered! Furthermore, is it possible that the alleged distress in previous years was the result of aggressive behaviour by the pro-Choice demonstrators, rather than the small pro-Life group?
Pregnant women are often under immense pressure from families and peers, to abort their child, and it is to pro-life organisations that they turn for help. These peaceful and dignified pro-life aid groups must be allowed to continue their prayerful presence where needed, always subject to common and statutory law. In our country, particularly concerning matters of life and death, and abortion is certainly this, free speech and the right to peaceful protest has always been protected, and must be allowed to continue.

The prejudiced attitude of certain NHS administrators, local government officials, and the media, towards peaceful pro-life activities designed to support a mother and her unborn child, assume a scenario of Goliath v David proportions. We know of course, that in the end, with God's help, David triumphed.