'The Belfry' at Bruges - thoughts of G.K.Chesterton.


Sincere, if somewhat belated, New Years greetings to one and all. Severe weather conditions over the Christmas period resulted in loss of internet access for two weeks. Pleased to say that we are once again in touch with the wider world. 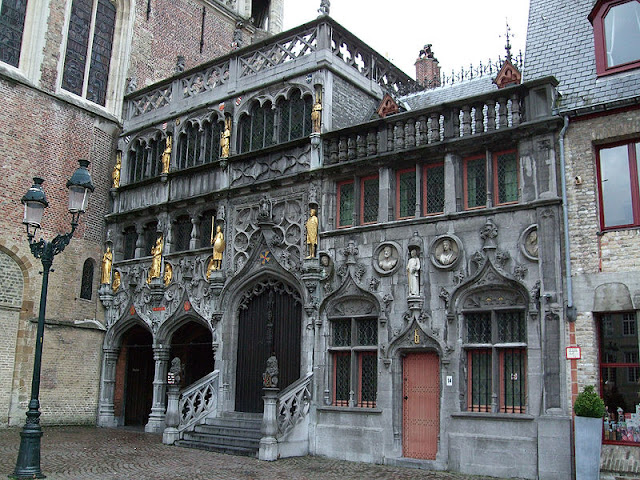 I expect many readers of this post will, at some time in their life, have visited  Bruges in Belgium. I have visited it only once, when in the early 1950s as a young teenager and one of the altar-servers at St Elphege Church, Wallington, we were treated by our parish priest, Fr Charles Ward, to a trip to Bruges. It was rather a long time ago and my memory is not as good as I would wish, but we travelled by ferry across the English Channel, then, either by rail or coach to Bruges. It was a great adventure for us boys, for it was not that long after the end of the war, and I doubt that any of us had been abroad before. To be honest my memories of Bruges are vague, but I do remember it as a particularly calm and peaceful city, with many mediaeval churches and buildings, and criss-crossed with canals. In those days motorised traffic was light and the numbers of visitors and tourists far less than they are today. The most important venue for us was almost certainly the Basilica of the Holy Blood, in which a relic of the ‘Precious Blood’ of Christ is housed. Regrettably I cannot remember details, but I strongly recommend the informative and interesting article on Wikipedia concerning this. The one building that does stand out in my mind, is the Belfry, which literally dominates the Bruges skyline, and about which G.K.Chesterton, in his short story ‘The Tower’, has this to say:- 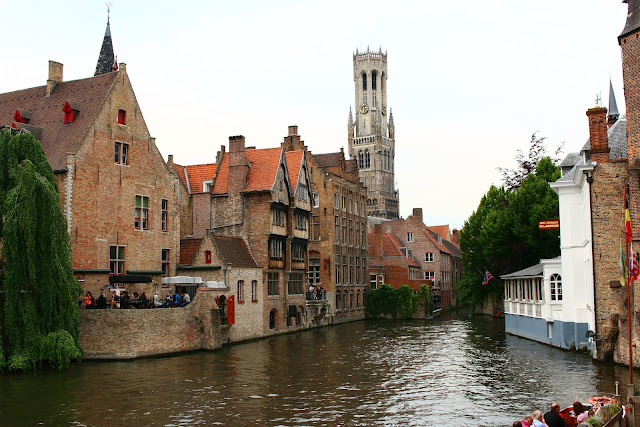 
‘I have been standing where everybody has stood, opposite the great Belfry Tower of Bruges, and thinking, as everyone has thought (though not perhaps said), that it is built in defiance of all decencies of architecture.  It is made in deliberate disproportion to achieve the one startling effect of height. It is a church on stilts. But this sort of sublime deformity is characteristic of the whole fancy and energy of these Flemish cities.  Flanders has the flattest and most prosaic landscapes, but the most violent and extravagant of buildings.  Here Nature is tame; it is civilisation that is untamable. Here the fields are as flat as a paved square; but, on the other hand, the streets and roofs are as uproarious as a forest in a great wind. The waters of wood and meadow slide as smoothly and meekly as if they were in the London water-pipes. But the parish pump is carved with all the creatures out of the wilderness. Part of this is true, of course, of all art.  We talk of wild animals, but the wildest animal is man .  There are sounds in music that are more ancient and awful than the cry of the strangest beast at night. And so also there are buildings that are shapeless in their strength, seeming to lift themselves slowly like monsters from the primal mire, and there are spires that seem to fly up suddenly like a startled bird.’ 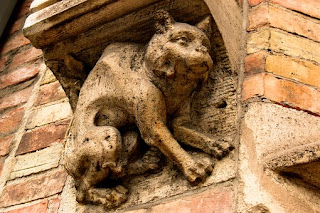 
‘This savagery even in stone is the expression of the special spirit in humanity.  All the beasts of the field are respectable; it is only man who has broken loose. All animals are domestic animals; only man is ever un-domestic.  All animals are tame animals; it is only we who are wild. And doubtless also, while this queer energy is common to all human art, it is also generally characteristic of Christian art among the arts of the world.  This is what people really mean when they say that Christianity is barbaric, and arose in ignorance. As a matter of historic fact, it didn’t; it arose in the most equably civilised period the world has ever seen.


But it is true that there is something in it that breaks the outline of perfect and conventional beauty, something that dots with anger the blind eyes of the Apollo and lashes to a cavalry charge the horses of the Elgin Marbles. Christianity is savage, in the sense that it is primeval; there is in it a touch of the Negro hymn. I remember a debate in which I had praised militant music in ritual, and someone asked me if I could imagine Christ walking down the street before a brass band. I said I could imagine it with the greatest ease; for Christ definitely approved  a natural noisiness at a great moment.  When the street children shouted too loud, certain priggish disciples did begin to rebuke them in the name of good taste. He said: “If these were silent the very stones would cry out.” 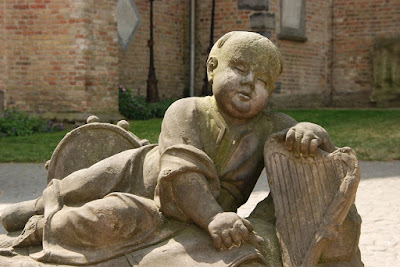 With these words He called up all the wealth of artistic creation that has been founded on this creed. With those words He founded Gothic architecture.  For in a town like this, which seems to have grown Gothic as a wood grows leaves, anywhere and anyhow, any odd brick or moulding may be carved off into a shouting face.  The front of vast buildings is thronged with open mouths, angels praising God, or devils defying Him.  Rock itself is racked and twisted, until it seems to scream.  The miracle is accomplished; the very stones cry out.


But though this furious fancy is certainly a specialty of men among creatures, and of Christian art among arts, it is still most notable in the art of Flanders.  All Gothic buildings are full of extravagant things in detail; but this is an extravagant thing in design.  All Christian temples worth talking about have gargoyles; but Bruges Belfry is a gargoyle. It is an un-naturally long-necked animal, like a giraffe. The same impression of exaggeration is forced on the mind at every corner of a Flemish town. And if anyone asks, “Why did the people of these flat countries instinctively raise these riotous and towering monuments?”, the only answer one can give is, “Because they were the people of these flat countries.” If anyone asks, “Why did the men of Bruges sacrifice architecture and everything to the sense of dizzy and divine heights?”, we can only answer, “Because Nature gave them no encouragement to do so.”’ 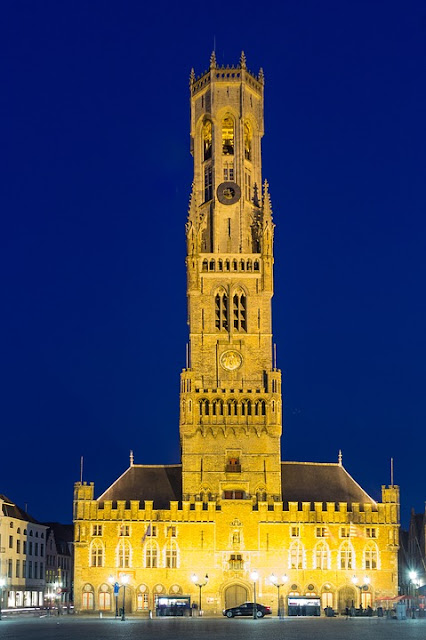 
`As I stare at the Belfry, I think with a sort of smile, of some of my friends in London who are quite sure of how children will turn out if you give them what they call ‘the right environment’. It is a troublesome thing, environment, for it sometimes works positively and sometimes negatively, and more often between the two. A beautiful environment may make a child love beauty; it may make him bored with beauty, most likely the two effects will mix and neutralise each other. Most likely, that is, the environment will make hardly any difference at all.  In the scientific style of history (which was recently fashionable, and is still conventional), we always had a list of countries that had owed their characteristics to their physical conditions.


Thus Spaniards (it was said) are passionate because their country is hot; Scandinavians adventurous because their country is cold; Englishman naval because they are islanders; Switzers free because they are mountaineers. It is all very nice in its way. Only unfortunately I am quite certain that I could make up quite as long a list exactly contrary in its argument point-blank against the influence of their geographical environment.  Thus Spaniards have discovered more continents than Scandinavians because their hot climate discouraged them from exertion. Thus Dutchmen have fought for their freedom quite as bravely as Switzers because the Dutch have no mountains.  Thus Pagan Greece and Rome and many Mediterranean peoples have specially hated the sea because they had the nicest sea to deal with, the easiest sea to manage. I could extend the list for ever. But however long it was, two examples would certainly stand up in it as pre-eminent and unquestionable.  The first is that the Swiss, who live under staggering precipices and spires of eternal snow, have produced no art or literature at all, and are by far the most mundane, sensible, and business-like people in Europe. The other is that the people of Belgium, who live in a country like a carpet, have, by an inner energy, desired to exalt their towers till they struck the stars.


As it is therefore quite doubtful whether a person will go specially with his environment or especially against his environment, I cannot comfort myself with the thought that the modern discussions about environment are of much practical value.  But I think that I will not write any more about these modern theories, but go on looking at the Belfry of Bruges. I would give them the greater attention if I were not pretty well convinced that the theories will have disappeared a long time before the Belfry.’

****************
"Without the divine assistance we cannot resist the might of so many and such powerful enemies;  now this assistance is granted only to prayer;  therefore, without prayer there is no salvation"
(ack. 'thoughts from St Alphonsus')
Posted by umblepie at 22:26 1 comment: