Father Francesco Pitocchi C.SS.R - 'God is all and I am nothing' 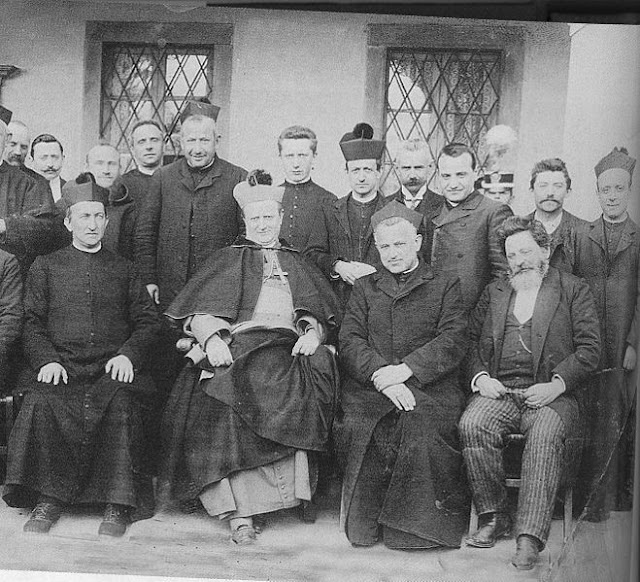 Father Angelo Roncalli (c1910) -centre row, 3rd from right,
- personal secretary to Bishop Giacomo Radini-Tedeschi of Bergamo (centre) from 1905-1914.
A tribute to the memory of Father Francesco Pitocchi C.SS.R. by Father Angelo Roncalli.
Rapallo, 14th December, 1922
The feast of the Exaltation of the Holy Cross
I had the good fortune to meet him first towards the end of 1902, twenty years ago. I had just returned to the Roman Seminary after my military service, to resume my theological studies, and prepare myself for holy orders.
At the conclusion of our first meeting he gave me a motto to repeat to myself calmly and frequently:-
‘God is all, and I am nothing’ – this was like a new principle that opened to my gaze new horizons, unexplored, full of mystery and spiritual beauty.
And I was satisfied.
That motto, which at once began to cut down any pretensions of personal pride, was like the first chapter of a precious book which, from that evening, Father Francesco taught me to read for my spiritual edification.
When I think now how much I owe to my dear Father’s wise teaching I blush at the small profit I derived from his loving instructions; but I also feel great satisfaction, which seems to me legitimate and holy, because those two years of immediate preparation for my priesthood were indeed, through the mercy of God and through the work of this worthy minister of his, the most fruitful and the richest in ideas and directives for the training of my spirit.
I used to go to see Fr Francesco, as did many of my companions, when he visited the Seminary, generally twice a week.  He would listen with great kindness, but did not say very much, often contenting himself with a thought from Scripture sufficient to convince us that he really cared for the soul of each one of us as if the Lord had sent him for that one alone; such was the interest he showed in our weaknesses and in our puny efforts to overcome them, which he supported with fatherly kindness. When we left him, kissing the cross on his stole or his hand raised in absolution or blessing, we felt as it were, new vigour, pleasurable and powerful, an enthusiasm, a great enthusiasm, to do good, which, in spite of so many failings - I speak for myself - was the best part, the beauty and the joy of our youth as seminarists.
Sometimes Father Francesco could not come to the seminary, either because his physical sufferings prevented him or because he was prevented by other and graver responsibilities: so we were allowed to go to see him at San Gioacchino. There in his cell, so neat but so humble, our dear Father was completely at home, in his own setting; it even seemed as if his face, words and bearing became even more holy and persuasive against that background of simplicity and monastic and apostolic poverty. That poor simple bed - how poor it looked - with the small wooden cross placed on the rough coverlet, the bare desk, the few paper devotional holy pictures which hung on the white walls, and the few books of moral or ascetic theology scattered around, the general atmosphere of piety, conferred a singular and convincing authority on the loving warnings he gave us concerning detachment from wealth, honours, and all ambitions, even the ambitions of ecclesiastical life. He spoke of the wisdom of being faithful in little things as a habitual discipline of the soul, which would have the effect of training us in a holy generosity and an enthusiasm for the adventures and sacrifices of the priestly apostolate in the service of Jesus Christ, the Church, and the souls of men.

In Father Francesco’s humble cell we breathed, like the sweetest perfume, the spirit of his great heavenly patron and father, St Alphonsus Maria de Liguori. 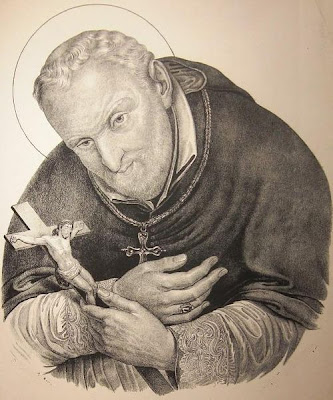 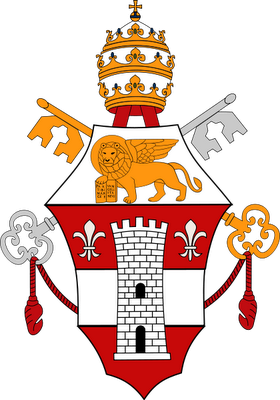 Pope John XXIII - Papal Coat of Arms
*************************
'The cross of the wicked thief, endured with impatience, became to him a precipice leading to hell; while the cross endured with patience by the good thief,  became to him a ladder to paradise'
('Thoughts from St Alphonsus' compiled by Rev C S Neiry C.SS.R  -  Burnes, Oates,Washbourne 1927)
'O Holy Mary, Mother of God, guide and protect thy people, especially our Holy Father, Pope Benedict XVI'

Labels: Father Francesco Pitocchi C.SS.R - God is all and I am nothing
Newer Posts Older Posts Home
Subscribe to: Posts (Atom)