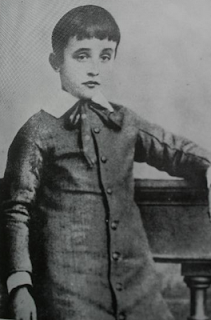 born 2nd March, 1876, in the ancient district of Ponte in Rome.
Educated at a primary school conducted by the Sisters of Providence, then for a short time at a private academy. 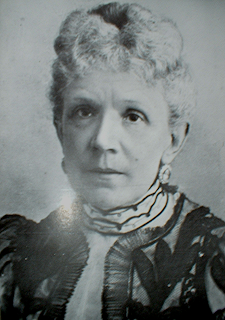 
Entered the Liceo Visconti at age 14, where he achieved outstanding academic results, leaving after four years in 1894, to train for the priesthood at Capranica College. From 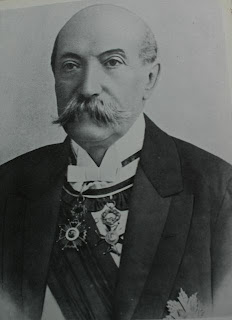 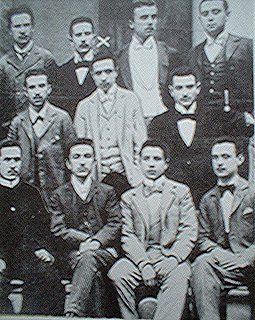 Ordained priest on Easter Sunday, 2nd April, 1899, in the private chapel of the ordaining prelate, Archbishop Cassetta, Patriarch of Antioch and Vicegerent of Rome.

Celebrated his first Mass the following day in the Borghese chapel of the Basilica of St Mary Major, in the presence of his mother, his brother Francesco (who was to play an important part in the drafting of the Lateran Treaty of 1929), his two sisters Giuseppina and Elisabetta, many priest friends of the family, relatives and other friends, and including Vincenzo Cardinal Vannutelli. His father was unable to attend due to serious illness.

After a period of parish work in Rome, he was invited in 1901 to join staff of Secretariate of State, continuing a family tradition of diplomatic and public service to the Papacy, his grandfather Marcantonio Pacelli having been appointed Under Secretary of the Interior by Pope Pius IX in 1851, and ten years later founding ‘L’Osservatore Romano’, the internationally respected Vatican newspaper.


After three years he was promoted to ‘minutante’, 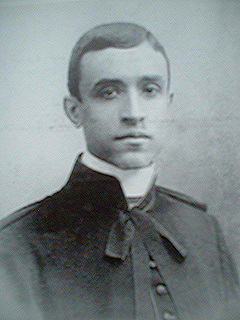 remaining in the Secretariate for the next ten years visiting among other places Belgium, Paris, and London - for the Coronation of King George Vth . 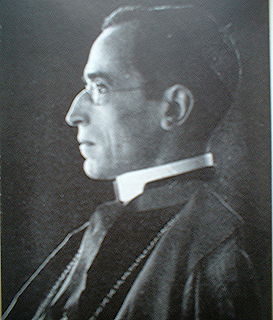 In 1914 as Monsignor Pacelli, he was appointed Secretary of the Congregation for Extraordinary Ecclesiastical Affairs, which responsibilities included concern for prisoners of war, homeless people, wounded soldiers, orphans, widows, and anxious relatives caught up in the tragedies of war. Three years later in 1917, he was appointed Nuncio to Bavaria, for which he was consecrated Titular Archbishop of Sardis by the Holy Father himself, on May 13th, the same day that Our Lady appeared for the first time to the three children at Fatima.
In 1924 his term as Nuncio culminated in the signing of a concordat between Bavaria and the Holy See. Five years later a concordat was concluded between the Holy See and 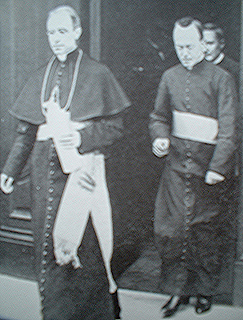 
A Concordat is signed in Germany 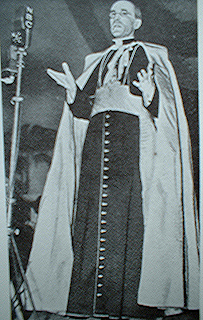 Addressing the professors and students of the Catholic University, Washington, DC. (1936)


That same year (1929) Archbishop Pacelli was recalled to Rome to receive the Red Hat of the cardinalate from the hands of Pope Pius XI. Two months later he was appointed Secretary of State.
He went as legate to Buenos Aires (1934), Lourdes (1935), the 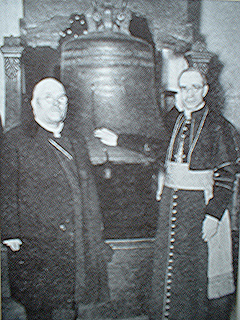 With Cardinal Dougherty of Philadelphia, Cardinal Pacelli during his American tour, visited the symbol of American independence, the Liberty Bell. (1936) 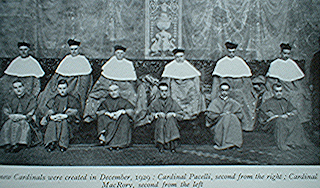 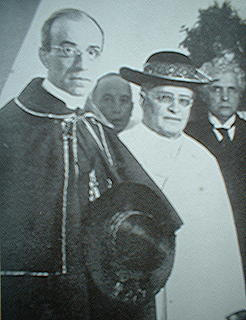 
On 2nd March 1939, his sixty-third birthday, Eugenio Cardinal Pacelli was elected Pope, after a conclave that lasted only a few hours. 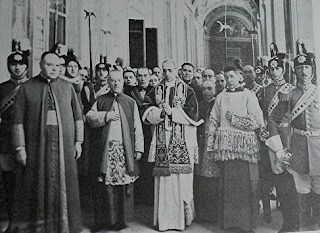 After election as Supreme Pontiff (1939)
In 1939 the work of the Vatican Information Office was begun, collecting and transmitting news about prisoners of war, internees and refugees. By the end of the first year some 439 messages had been sent and a card index set up in the office of the Secretariate of State. By 1944 more than 10,000 requests were received daily, necessitating the employment of 600 regular workers. Postal and telegraphic communications, as well as the Vatican Radio, were used. From October 1939 to December 31st 1944, more than 1,840,000 incoming requests and messages were dealt with, and more than 5,630,000 sent out. The displacement of populations, precipitated by ruthless regulations of warring states, touched Pope Pius XII deeply. 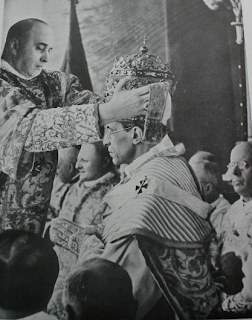 The Tiara is placed on the Holy Father's head

Relief was organised for the wandering and homeless of many lands, including the provision of vast amounts of clothing, day and overnight camps, general relief, summer camps and other facilities for children, restaurants and medical services. 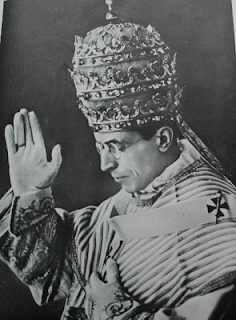 At the end of the war the Holy Father donated 50,000,000 lire towards the construction of homes for the poor in Italy, in addition to providing food to the value of 1,020,000,000 lire to hospitals, prisons, and other institutions. From July 1945 to April 1946, the Holy See expended 50,000,000 lire to aid prisoners and their families.
The Papal Blessing from the new Pope
These are but a few examples of the practical charity promoted by the Holy Father, which of course had its counterpart in the untiring solicitude shown for the spiritual welfare of all mankind, especially Catholics. Pope Pius XII stressed the importance and need for constant charity, “ …. faith must be accompanied by charity, charity which unites us all with one another and with Christ ….” ( encyclical letter ‘Orientalis, Ecclesiae Decus’). 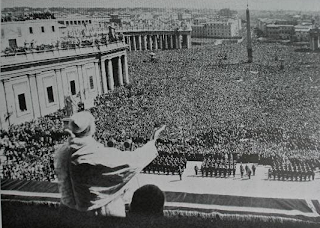 Easter Sunday 1948 - the Holy Father blessing the people from the balcony of St Peter's.

Over and over again the Holy Father stressed that no Catholic worthy of the name can be an anti-semite, for anti-semitism is a violation of Christian charity. In January 1945, the Holy Father pronounced, “ They (the Jews) are the people whose country God chose to be the birthplace of His Son. Our God is their God, and our lawgiver is their lawgiver. For centuries they have been most unjustly treated and despised. It is time they were treated with justice and humanity. God wills it and the Church wills it. St Paul tells us that the Jews are our brothers. Instead of being treated as strangers, they should be welcomed as old friends. It is not by our own merit that we have had the heritage of Our Lord. Their entry into the Church will mark the spiritual renovation of the world”.
Again, towards the end of the same year, when addressing a group of Jews who had come because they “wished the supreme honour of being able to thank the Holy Father personally for his generosity on their behalf during their persecution” he said ........ 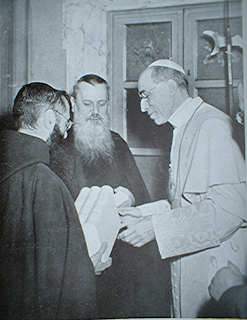 ......... “Your coming before Us gives an intimate testimony of the gratitude on the part of those men and women who, in times of their agony and deadly dangers, have experienced how the Catholic Church and her true followers in the exercise of charity, could rise above all narrow and arbitrary limits created by human selfishness and racial passions” 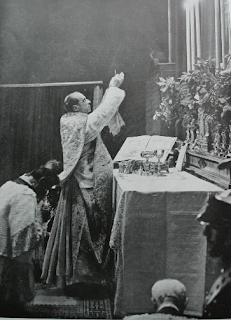 In his Christmas allocution for 1948 the Holy Father emphasised the Church’s unceasing concern for those souls temporarily lost or in danger, prayerfully awaiting the return of these children and prepared to do anything for this end ..”except one thing, that she be not asked to gain the return of the children who have left her – either in the distant past or recently- at the expense of any diminution or tarnishing of the deposit of Christian faith confided to her keeping” 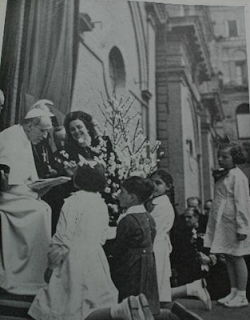 His Holiness receives greetings from children on the golden anniversary of his ordination to the priesthood -April 1949.

This very brief resume of part of the life of Pope Pius XII goes only as far as Holy Year 1950. The photographs and general content appeared in the ‘Angelic Shepherd’ by Father Senan, OFM. Cap.- Printed by ‘The Capuchin Annual Office. Holy Year 1950’. ( for which I give due acknowledgement and thanks.)
The comments of the Holy Father respecting anti-semitism, have certainly as much relevance today as they had then. 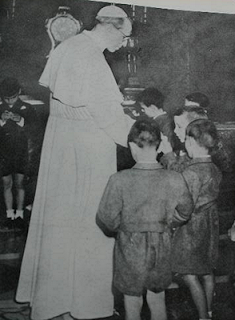 His Holiness with orphans from the Villa Nazareth


The cause for the eventual possible beatification and canonisation of Pope Pius XII is currently underway. We pray that God will see fit to honour this brave and holy Pontiff , to the glory of God and of His Church. 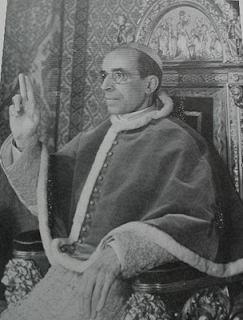 Reproduction of a direct colour portrait of His Holiness by David Waddington. The Message given to accompany the portrait was as follows:-
'We pray that Almighty God may have mercy on this stricken world, and cause misunderstanding and hatred to cease, truth and charity to prevail, and that under His guiding Spirit, the nations may soon enjoy the blessings of a lasting peace.
From the Vatican, January 25, 1948
Pius pp. x11 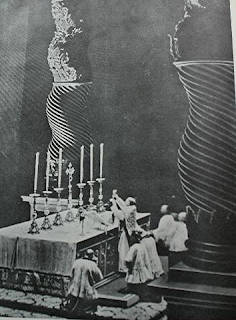 His Holiness celebrates at midnight, his first Mass of the Holy Year 1950 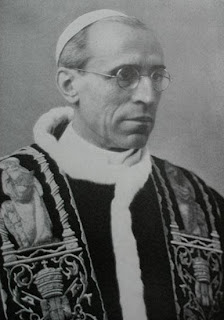 Prayer for the Canonisation of the Servant of God, Pope Pius XII

O Jesus, eternal High Priest, Who didst deign to raise Thy faithful servant, Pius XII, to the supreme dignity of Thy Vicar on earth and to grant him the grace to be a fearless defender of the faith, a valiant champion of justice and peace, zealous in proclaiming the glory of Thy most holy Mother, a shining example of charity and of all virtues, deign now to grant us, in view of his merits, the graces we ask of thee; so that, made certain of his efficacious intercession with Thee, we may one day see him raised to the honours of our altars. Amen.