The Western Rising of 1549 - Martyrs for the Old Mass

I recently came across a copy of an interesting document, given to me in the summer of 1999, as a participant in a Pilgrimage on the Devon/Cornwall borders,  commemorating the 450th anniversary of the Western Rising. The Chaplain was the much loved late Fr Michael Crowdy, and the pilgrimage  leader the late Mr Robin Pannell, (Carmel Books), a knowledgeable and inspirational man, with a droll sense of humour and strong traditional Catholic views, which he expressed  firmly and fearlessly whenever appropriate.. A copy of the document entitled 'The Western Rising of 1549' (see below)  was given to those taking part in the pilgrimage, also a short written history of the Western Rising by the late Michael Davies, and published by the Latin Mass Society.
In his article Michael Davies makes some interesting points, beginning with the reminder that although King Henry VIII wanted a new wife, several in fact, he did not want a new religion. Where the liturgy was concerned he was particularly conservative, and when he died the traditional Latin Mass was still being celebrated in every church in the country, unchanged but for the removal of any prayer for the Pope or commemoration of St Thomas a Becket. 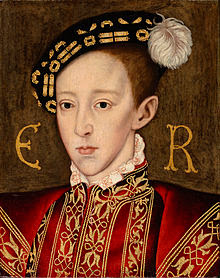 King Edward VI (b.1537 d.1553)  reigned 1547-53
On the King's death he was succeeded by the sickly nine year old boy King Edward VI, the son of Henry's third wife Jane Seymour. The new King was no more than a puppet of his Protestant dominated Council, whose stated aim was to obliterate the Catholic faith from the face of the land, the principal means adopted to achieve this aim being to destroy the hitherto unchanged immemorial Latin Mass and replace it with a vernacular Protestant Communion service.
Their leader in this objective was Thomas Cranmer, appointed Archbishop of Canterbury under Henry VIII. Cranmer lived a lie whilst Henry was still alive, secretly espousing Protestantism yet still a Prince of the Church.He even celebrated the traditional Latin Mass at Edwards coronation, but shortly afterwards used a series of injunctions to initiate the revolution. The injunctions abolished all processions, ordered the destruction of all images,including those in windows; imposed Communion under both kinds; had parts of the Mass celebrated in the vernacular; condemned any form of the recitation of the Rosary; and forbade the burning of all lights apart from two on the altar. The clergy were ordered to exhort the faithful to do away with images in their homes. 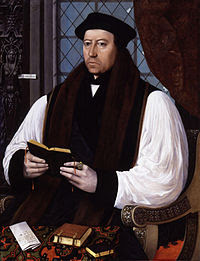 Thomas Cranmer  Archbishop of Canterbury
In 1549 the  Latin Mass was abolished and replaced by a new 'Order of Service' in English, with Communion under both kinds, from which every specific reference to  'sacrifice'  had been removed. Apart from its doctrinal significance, the change from a totally Latin to a totally vernacular liturgy involved a cultural disaster of significant proportion as it severed the liturgical musical heritage of western Christendom, which was entirely in Latin. The imposition of the 1549 Prayer Book made clear to the ordinary Catholic that his beloved Mass had been taken from him.
The 'Western Rising' was what would be known today as a 'grass roots' reaction to the new English 'Order of Service'.The demand for the restoration of the traditional Latin Mass originated from the laity and not the clergy, most of the latter choosing to use the new service rather than incur the ferocious penalties decreed for those who refused it. In the village of Sampford Courtenay, W. Devon, the men of the village forbade their priest to use the new Service, insisting that he say the Old Mass.  As the news of the restoration of the Old Mass spread  through neighbouring parishes, many  men from surrounding villages gathered  in Sampford Courtenay determined to show unity of purpose.
Within a very short time  the Old Mass was restored in many  local parishes, and the rebels-as we shall  call them, then occupied the small town of Crediton, about 8 miles from Exeter,where they planned to gather strength for a march upon Exeter.By this time Government troops were instructed to bring the insurrection to a speedy end, and as a result drove the rebels  from Crediton by means of  firing the thatched roofs of the barns being used by them, and forcing them to disperse.
The victory was a hollow one, for the rebels re-grouped in larger numbers at Clyst St Mary, about 2 miles outside Exeter, under the leadership of  Sir Thomas Pomeroy and Humphrey Arundell.  The historian and Protestant Professor W.G.Hoskins, described their march on Exeter:-
'With the sacred banner of the Five Wounds of Christ floating before them, and the pyx borne under a rich canopy, with crosses, banners, candlesticks, swinging censers, and holy bread and water "to defend them from devils and the adverse power," the procession of Devon and Cornish farmers and labourers, led by a few of the gentry, ignorantly pitting themselves against the whole power of the state, marched on Exeter behind their robed priests, singing as they advanced.... 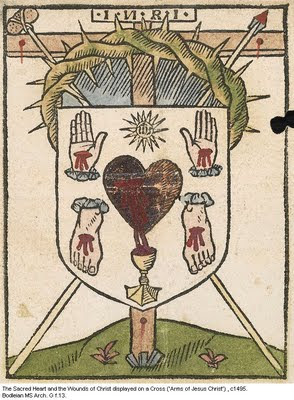 The Sacred Banner of the Five Wounds of Christ
...... We do not know how many conservative or stubborn Westcountrymen marched in that hopeless rebellion, a few thousand probably. They spoke and thought for tens of thousands, no doubt, who disliked and detested the changes. The religious nature of the rebellion is made clear by the fifteen demands of the rebels (see below).
Cranmer rejected the demands outright, accusing the 'ignorant' rebels of being led 'by the nose' by the clergy, and demanding that they surrender. The rebels refused and fierce fighting ensued with the poorly-armed rebels sometimes outnumbered four to one by Government forces, many of them foreign mercenaries, commanded by Lord Russell (Lord Privy Seal) and Lord Grey de Wilton. On the first day, some 1000 rebels were killed, and a further 900 taken prisoner and then massacred without pity.. The battle continued the next day, again the rebels were vastly outnumbered resulting in defeat but not without honour, refusing to concede as long as life and limb lasted. Few survived, yet still they fought for the old Mass, with the final battle at Sampford Courtenay involving 2000 rebels against a royal army of 8000 trained troops, with as many as 1200 rebels killed.
Groups of rebels still kept up the fight, with a final confrontation at Kings Weston in Somerset, where exhausted and outnumbered, they suffered 'great slaughter and execution', with 104 men taken prisoner. Singly or in pairs they were hanged in Bath, Frome, Wells, Glastonbury, Ilminster, Dunster, Milverton, Wiveliscombe and other Somerset towns. In Devon, every crossroad seemed to contain a gibbet from which hung the putrefying corpse of one of the humble Catholics involved in the fight for the old Mass, a fearful reminder of the price that had been paid for daring to uphold the Faith of their fathers. A total of at least 4000 Westcountrymen died for the traditional Mass at the hands of  the Royal army.
The new English 'Order of Service'  had received its baptism of blood. The Magistrates were ordered to enforce the use of the Prayer Book, and the church bells used in every parish by the rebels " to stir the multitude and call them together" were to be removed with the exception of the smallest which could be retained " to call the parishioners together to the sermons and divine service". Thus were the peasants of the West induced to accept "the very godly order set forth by order of parliament for common prayer in the mother tongue
**********************
"On Pentecost Sunday, by law, the Traditional Latin Mass was abolished in England. It was the last in a series of anti-Catholic actions of the government, with almost no opposition from the bishops. From that date a New Order of Service was to be used, designed to please Protestants and to make those who attended it week after week become gradually Protestants themselves. For nearly all of England this was most unwelcome. For the faithful in Cornwall and Devon it was totally unacceptable. They took up arms. The year was 1549, two years after King Henry VIII had died. These are the requests made by these faithful Catholics, willing to die for their faith" ---

The Western Rising of 1549
Articles of us, the Commoners of Devonshire and Cornwall, in divers Camps, by East and West of Exeter.
1. We will have the general council and holy decrees of our forefathers observed, kept, and performed, and whosoever will gainsay them, we hold them as heretics.
2. Restoration of Statute of  Six Articles of  Henry VIII against heresy.
3. We will have the Mass in Latin as was before, and celebrated by the Priest without any man or woman communicating with him.
4. We will have the Sacrament hang over the High Altar and there to be worshipped as it was wont to be, and they, which will not thereto consent, we will have them die like heretics against the Holy Catholic Faith.
5. We will have the Sacrament of the Altar but only at Easter delivered to the lay people, and then only in one kind.
6. We will that our Curates shall minister the Sacrament of Baptism at all times, as well in the week as on the holy day.
7. We will have holy bread and holy water made every Sunday, Palms and Ashes at times accustomed. Images to be set up again in every Church, and all other ancient old ceremonies.
8. We will not receive the New Service because it is but like a Christmas game, but we will have our old service of Matins, Mass, Evensong and Procession, in Latin as it was before. And so we the Cornish men (whereof certain of us understand no English) utterly refuse this new English.
9. We will have every preacher in his sermon and every priest at his Mass, pray especially by name for the souls in Purgatory as our forefathers did.
10. Calling-in of the English translation of the Scriptures, that is unauthorised translations.
11. Demanding the release of  Dr.Moreman and Dr. Crispin, two Canons of Exeter, who were imprisoned in the Tower.
12. Demanding the recall of Cardinal Pole and his promotion to be of the King’s Council.
13. Demanding the restriction of number of servants a man might have.
14. Restoration of half the abbey and chantry lands and endowments, and foundation of two abbeys in every county.
15. For the particular griefs of our country we will have them so ordered as Humphrey Arundell and Henry Bray, the Kings Mayor of Bodmin, shall inform the King’s Majesty, if they may have safe conduct under the King’s Great Seal to pass and repass with a Herald of Arms.
By us: Humphrey Arundell     John Thompson, Priest
John Berry                     Henry Bray, Mayor of Bodmin
Thomas Underhill          Henry Lee, Mayor of Torrington
John Sloeman                 Roger Barrett, Priest
William Segar
Chief Captains                      The four Governors of the Camps
************************
All you holy English Saints and Martyrs,  pray for us and for our Holy Catholic Church.
Holy Mary,  pray for England thy Dowry.
Posted by umblepie at 18:11 2 comments: