With acknowledgement and thanks to 'Catholicism Pure and Simple' for the following interesting, informative, and spiritually  encouraging post.

The Meaning of the Names of the Holy Archangels Michael, Gabriel and Raphael

Today we celebrate the feast of three of the holy archangels. Their names have special meanings for their intercession between God and man.


The name of the Archangel Michael, Protector of the Church, means “Who is like God?" 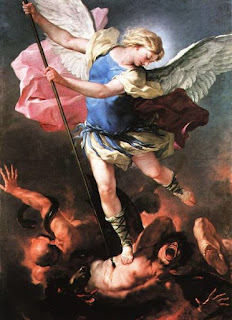 St Michael the Archangel (1632) by Luca Giordano
The name comes from the Hebrew מִיכָאֵל (Mikha’el) meaning “who is like God?”. This is a rhetorical question, implying no person is like God. Michael is one of the archangels in Hebrew tradition and the only one identified as an archangel in the Bible. In the Book of Daniel in the Old Testament he is named as a protector of Israel. In the Book of Revelation in the New Testament he is portrayed as the leader of heaven’s armies in the war against Satan, and is thus considered the patron saint of soldiers in Christianity and protector of the Church.


St. Michael himself comes to defend us in battle. He came down from heaven and appeared in Italy towards 525 under the pontificate of Gelasius I, in Apulia, on the summit of Monte Gargano, near the Adriatic and the ancient Sipontum. He requested that a sanctuary should be erected where the True God should be worshipped in order to make amends for the pagan worship that once occurred there, and in memory of himself and all the angels. The Sanctuary of Monte Sant’Angelo sul Gargano still remains to this day. and has become much celebrated on account of numerous miracles.


St. Michael later appeared with a flaming sword atop the mountain during a storm on the eve of battle for the Lombards. The Lombards attributed their victory in battle on that day. He is regarded as the special Guardian Angel of Saint Joseph and the Guardian Angel of each one of the Popes and one of the seven great angels who stand before the throne of God.


The prayer to St Michael the archangel was composed by Pope Leo XIII after his prophetic vision of Satan’s boast to Our Lord that he could destroy the Church in 100 years. It is the plea to Mary and the passionate request to the Prince of the heavenly host, (“Saint Michael the Archangel, defend us in battle…”) beseeching God to send Satan back to hell. On October 13, 1884, after the Pope had finished celebrating Mass in the Vatican Chapel, attended by a few Cardinals and members of the Vatican staff, he suddenly stopped at the foot of the altar. He stood there for about 10 minutes, as if in a trance, his face ashen white. (He recounted afterwards the details of this terrifying vision.) Then, going immediately from the Chapel to his office, he composed this prayer to St. Michael, with instructions it be said after all Low Masses everywhere to defeat the evil plans of Satan and his devils.


Could the current troubles in the Church today be attributed, at least in part, to the abolishing of this holy prayer in the Liturgical changes of 1964?

The name of the Archangel of the Annunciation, Gabriel, means “God’s strength” or “Power of God” 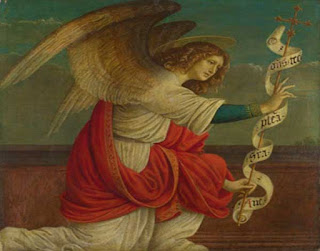 'Saint Gabriel the Archangel' by Gaudenzio Ferrari
St. Gabriel was sent to Daniel to enlighten him as to the time when Christ would be born, and to Zachary, at the hour in which he offered incense in the temple, to announce to him the birth of John the Baptist, the Precursor of the Messias. “Only Gabriel, a name that means ‘Power of God,’ was found worthy among all the angels,” says St. Bernard, “to announce to Mary the designs of God with regard to her”. He was chosen from among all the angels to proclaim the wondrous mystery of the Incarnation.


With a feeling of holy reverence, St. Gabriel came to the Virgin who from all eternity had been chosen to be the Mother of God, Jesus Christ. In the words inspired by the most High, and which the Church desires us to repeat frequently, he said to her: “Hail, full of grace, the Lord is with thee: blessed art thou among women.”


And seeing that Mary was taken aback by this salutation, the angel explained that he had come to obtain her consent, her Fiat, that the great mystery on which depended the redemption of mankind might be accomplished. “I am Gabriel who stand before God, and I have been sent I to speak to thee and to tell thee these good tidings”.


Mary then, without hesitating, submitted with the most profound humility: “Behold the handmaid of the Lord: be it done to me according to Thy word”.


And in that instant was accomplished the greatest of all miracles, when God raised unto Himself and into union with Him the blessed fruit of the womb of the Virgin: “And the Word was made flesh and dwelt among us.” The Word took upon Him our humanity, our poverty, our nothingness, and gave us in return His divinity. The prayers of the Angelus remind us daily of this most sublime moment in the history of Mankind when Heaven reached down and touched Earth.


Indeed, the Virgin Mary needed “God’s strength” at the moment of the Incarnation, as Pope Saint John Paul II eloquently put it in his apostolic letter Mulieris dignitatem on the dignity and vocation of women, § 3:


Hence Mary attains a union with God that exceeds all the expectations of the human spirit. It even exceeds the expectations of all Israel, in particular the daughters of this Chosen People, who, on the basis of the promise, could hope that one of their number would one day become the mother of the Messiah. Who among them, however, could have imagined that the promised Messiah would be “the Son of the Most High”? On the basis of the Old Testament’s monotheistic faith such a thing was difficult to imagine. Only by the power of the Holy Spirit, who “overshadowed” her, was Mary able to accept what is “impossible with men, but not with God” (cf. Mk 10: 27).


The angel Gabriel, “strength of God,” came to announce and support the divine vocation of the Woman, the Blessed Virgin Mary, chosen from all eternity to be the Mother of God. This powerful archangel will become our strength to help us carry out our own vocations when we invoke him! 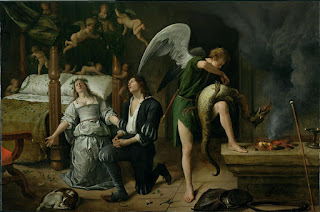 Although only the archangels Michael and Gabriel are mentioned by name in the New Testament, the Gospel of John speaks of the pool at Bethesda, where many ill people rested, awaiting the moving of the water. “An angel of the Lord descended at certain times into the pond; and the water was moved. And he that went down first into the pond after the motion of the water was made whole of whatsoever infirmity he lay under” John 5:1-4. Because of the healing powers often linked to Raphael, the angel spoken of is generally associated with St. Raphael, the Archangel.


The name of the angel Raphael appears in the Biblical Book of Tobit. The Book of Tobit is considered deuterocanonical by Catholics and Orthodox. St. Raphael is one of the seven spirits who always stand before the Lord and offer Him the incense of their adoration and that of men. “While thou didst pray with tears,” he declared to Tobias, “and didst bury the dead, and didst leave thy dinner to conceal the dead in thine house by day, and by night didst bury them, I presented thy prayer unto the Lord. And because thou wast agreeable to the Lord it was necessary that temptation should try thee.”


Raphael had first appeared disguised in human form as the travelling companion of Tobit’s son, Tobiah (Greek: Τωβίας/Tobias), calling himself “Azarias the son of the great Ananias”. During the course of the journey the archangel’s protective influence is shown in many ways including the binding of a demon in the desert of upper Egypt. He was sent by the Lord to return to heal the blind Tobit and to deliver Sarah, his future daughter-in-law, from the demon Asmodeus, who kills every man she marries on their wedding night before the marriage can be consummated. Azarias then makes himself known as “the angel Raphael, one of the seven, who stand before the Lord” (Tobit 12:15). He is venerated as Saint Raphael the Archangel.


St. Raphael is an eminent intercessor – a special patron of the sick and travellers – who brings our prayers to God. He is one of the highest angelic spirits that assist God and, therefore, has conditions to ask God for the graces we need.


This general consideration inspired by St. Raphael’s mission shows us how similar earthly realities are to heavenly realities. Insofar as we love the earthly realities that are similar to those of Heaven, we are preparing ourselves for Heaven. Love of hierarchy, nobility, distinction and elevation prepare us for Heaven.


This preparation for Heaven is ever more necessary as we sink into a world of horror. Our exterior surroundings are increasingly monstrous, chaotic and disorganised. In order not to fall into despair, the human soul needs to see something that is magnificent and well-organised. It is harmful to a man’s soul to live in constant disarray, seeing things deteriorating and decaying. Since everything that is elevated and dignified is disappearing from the earth, our desire for Heaven should intensify in order not to lose the psychological conditions to survive in this world. 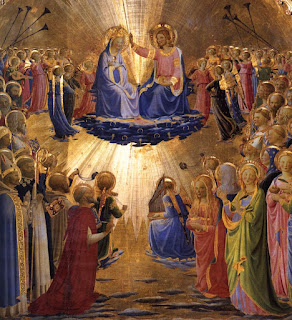 'Crowning of the Queen of Heaven' by Fra Angelico

(Sources for this article include adaptions from Liturgia Latina, Tradition in Action, Marie de Nazareth)


(ack. and thanks to 'Catholicism Pure and Simple' for the above post.)

Posted by umblepie at 23:45 No comments:

Labels: and Raphael, Gabriel, The meaning of the names of the holy Archangels Michael
Newer Posts Older Posts Home
Subscribe to: Posts (Atom)