The 'Raphael Cartoons' - magnificent art to the glory of God.

It is said that we learn something every day, and certainly this applies to me. I have only recently discovered the existence of the Raphael Cartoons, and am absolutely flabergasted at the beauty and magnificence of these superlative works of art.
*************** 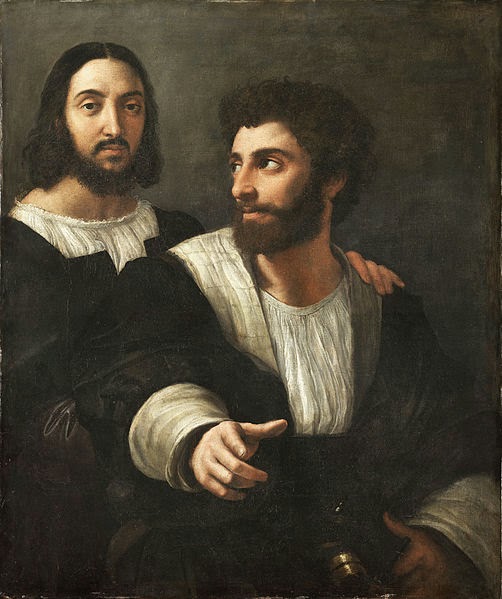 The Raphael Cartoons are seven large cartoons for tapestries, belonging to the British  Royal Collection  but since 1865 on loan to the Victoria and Albert Museum in London, designed by the High Renaissance painter Raphael in 1515–16, and showing scenes from the Gospels and Acts of the Apostles. They are the only surviving members of a set of ten cartoons commissioned by Pope Leo X for tapestries for the Sistine Chapel in the Vatican Palace, which are still (on special occasions) hung below Michelangelo's famous ceiling.
The Raphael Cartoons represent scenes from the lives of Saints Peter and Paul. The series emphasise a number of points relevant to contemporary controversies in the period just before the Protestant Reformation, but especially the entrusting of the Church to Saint Peter. There were relatively few precedents for these subjects, so Raphael was less constrained by traditional iconographic expectations than he would have been with a series on the life of Christ or Mary.

The cartoons are painted in a glue distemper medium on many sheets of paper glued together (as can be seen in the full-size illustrations); they are now mounted on a canvas backing. They are all slightly over 3 m  tall, and from 3 to 5 m  wide; the figures are therefore over-lifesize. Although some colours have faded, they are in general in very good condition. The tapestries are mirror-images of the cartoons, as they were worked from behind. Raphael's workshop would have assisted in their completion; they were finished with great care, and actually show a much more subtle range of colouring than was capable of being reproduced in a tapestry.

The seven cartoons were probably completed in 1516 and were then sent to Brussels, where the Vatican tapestries were woven by the workshop of Pieter van Aelst the Elder. Various other sets were made later, including one acquired by Henry VIII of England in 1542; King Francis I of France had another of similar date. Cartoons were sometimes returned with tapestries to the commissioner, but this clearly did not happen here. The tapestries had very wide and elaborate borders, also designed by Raphael, which these cartoons omit; presumably they had their own cartoons. The borders included ornamentation in an imitation of Ancient Roman relief sculpture and carved porphyry. The tapestries were made with both gold and silver thread; some were later burnt by soldiers in the Sack of Rome in 1527 to extract the precious metals. The first delivery was in 1517, and seven were displayed in the Chapel for Christmas Day in 1519 (then as now, their display was reserved for special occasions).

(The above information and details courtesy of Wikipedia.)

Jesus asked his disciples,"Who do men say the Son of Man is?" They replied, "Some say, John the Baptist; and others, Elias;and others, Jeremias, or one of the prophets." He said to them, "But who do you say that I am?"  Simon Peter answered and said,"Thou art the Christ, the Son of the living God." Then Jesus answered and said, "Blessed art thou, Simon Bar-Jona, for flesh and blood has not revealed this to thee, but my Father in heaven. And I say to thee, thou art Peter, and upon this rock I will build my Church, and the gates of hell shall not prevail against it. And I will give thee the keys of the kingdom of heaven; and whatsoever thou shalt bind on earth shall be bound in heaven, and whatsoever thou shalt loose on earth shall be loosed in heaven."

Peter and John were going up into the temple at the ninth hour of prayer, and passed a lame man at the gate who daily laid there  to beg alms. On asking Peter and John for alms, John said, 'Look at us.' Peter then said, 'Silver and gold I have none; but what I have, that I give thee. In the name of Jesus Christ of Nazareth, arise and walk'. And taking him by the right hand, he raised him up, and immediately his feet and ankles became strong, and he began to walk. 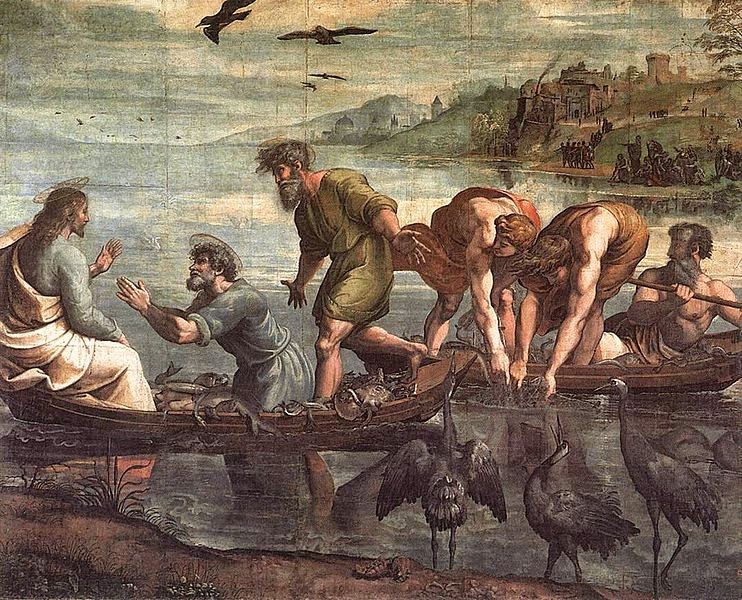 This incident occurred after Christ's resurrection from the dead. Seven of the Apostles had spent the night fishing in the sea of Tiberias, and had caught nothing. As they were about to give up, Jesus, whom they did not at first recognise, appeared on the shore and told them to cast their nets again, whereupon they caught so many fish that the nets were filled. John was the first to recognise Jesus, and Peter immediately wrapped his tunic around himself, jumped into the sea, and swam ashore to greet Him; the others followed in the boats. A fire was already lit, and Jesus invited the apostles to breakfast with Him, cooking the fish just taken and sharing bread. 'This is now the third time that Jesus appeared to the disciples after He had risen from the dead'.

'Now the multitude of the believers were of one heart and soul, and not one of them said that anything he possessed was his own, but they had all things in common. Nor was there anyone among them in want. For those who owned lands or houses would sell them and bring the price of what they sold and lay it at the feet of the apostles, and distribution was made to each, according as anyone had need'.
Ananias and his wife Sapphira, sold their land but withheld a portion of the profit. Ananias presented his donation to Peter, who replied, "Why is it that Satan has so filled your heart that you have lied to the Holy Spirit?" Peter pointed out that Ananias was in control of the money and could give or keep it as he saw fit but had withheld it from Peter and lied about it. Peter stated that Ananias had lied not only to him but also to God. Ananias died on the spot and was carried out. Everyone who heard about the incident feared the Lord. Three hours after Ananias' death his wife arrived, unaware of what had happened. Peter asked her the price of the land that she and Ananias had sold, and she stated the same untruthful price that Ananias had given. She also fell dead, apparently a punishment for deceiving God.

The figure standing at the left in a red cap is a portrait of Leo; next to him is Janus Lascaris, a Greek scholar in Rome. The kneeling couple at the right were probably added by Giulio Romano, then an assistant to Raphael.

The Conversion of the Proconsul or The Blinding of Elymas (Acts 13:6-12).

Paul had been invited to preach to the Roman proconsul of Paphos, Sergius Paulus, but is heckled by Elymas, a "magus", whom Paul miraculously causes to go temporarily blind, thus converting the proconsul.

The Sacrifice at Lystra (Acts 14:8).
After Paul miraculously cures a cripple, the people of Lystra see him and his companion Barnabas (both standing left) as gods, and want to make a sacrifice to them. Paul tears his garments in disgust, whilst Barnabas speaks to the crowd, persuading the young man at centre to restrain the man with the sacrificial axe.

And still before mine eyes
My mortal fall they lay;
Whom grace and virtue once advanced
Now sin hath cast away.

Oh thoughts! No thoughts but wounds,
Sometime the seat of joy,
Sometimes the store of quiet rest,
But now of all annoy.

I sow’d the soil of peace,
My bliss was in the spring;
And day by day the fruit I eat
That virtue’s tree did bring.

To nettles now my corn,
My field is turned to flint,
Where I a heavy harvest reap
Of cares that never stint.

The peace, the rest, the life,
That I enjoyed of yore,
Were happy lot, but by their loss
My smart doth sting the more.

So to unhappy men,
The best frames to the worst;
Oh time! oh place! where thus I fell;
Dear then, but now accurst.
St Robert Southwell S.J. (Poetical works)

THIS IS MY FRIEND *

Let me tell you how I made His acquaintance.
I had heard much of Him, but took no heed.
He sent daily gifts and presents, but I never thanked Him.
He often seemed to want my friendship, but I remained
cold.
I was homeless, and wretched, and starving and in peril
Every hour; and He offered me shelter and comfort and
Food and safety; but I was ungrateful still.
At last He crossed my path and with tears in His eyes
He besought me saying, Come and abide with Me.

Let me tell you how He treats me now.
He supplies all my wants.
He gives me more than I dare ask.
He anticipates my every need.
He begs me to ask for more.
He never reminds me of my past ingratitude.
He never rebukes me for my past follies.

Let me tell you further what I think of Him.
He is as good as He is great.
His love is as ardent as it is true.
He is as lavish of His promises as He is faithful in
keeping them.
He is as jealous of my love as He is deserving of it.
I am in all things His debtor, but He bids me call Him
Friend.
• ‘From an old manuscript’
ack   ‘The friendship of Christ’ by Robert Hugh Benson.