'Delight in the Lord' - by Rev Daniel Considine S.J.


I have a small book entitled ’Delight in the Lord’ which comprise the ‘Notes of Spiritual Direction and Exhortations of the Rev Daniel Considine S.J.’ and published by Burns, Oates, & Washbourne  Ltd, of  London, in 1925.  The introduction to this book explains that -
‘These points of 'spiritual direction' were given for the guidance of a religious engaged in active work.  The 'exhortations' were given to a community employed in various apostolic labours.  Both cover the same period of about six years.  A great deal was written down immediately and is in Father Considine’s actual words; the rest follows his sense as faithfully as possible.  They have been printed in the hope that they may help other souls to attain to something of that loving trust in God and joy in his service which was the aim of all Father Considine’s direction.'

Delight in the Lord – an exhortation.

The world is utterly mistaken when it thinks of the service of God as dull and gloomy.  It is a service most full of joy.  God tells us we are to “delight in the Lord”, and he never tells us to do what is impossible.  When our Lord was on earth, he was not morose or hard to please;  he was the most delightful of companions.  We can see this from the Gospels.  He could not get the crowds to leave him alone.  They thronged him on every side so that he had not so much as time to eat.  His disciples were perfectly happy in his society and wanted nothing else.  Look at the way he treated them.  When our Lord came to them walking on the water, St Peter said, “Lord, if it be thou,  bid me come to thee upon the water”,  and our Lord said “Come.”  St Peter could have given no good reason why he should  be allowed to walk on the sea. He was simply wanting to show off.  Grave men would say perhaps that our Lord should have rebuked him for his inconsiderate demand.  But our Lord loves to give pleasure,  and he loves simplicity.  He was pleased with that spontaneous, boyish request.  St Peter was full of faults and very often came in for rebukes from his Master.  But our Lord so easily forgets our little peccadilloes, and is so pleased to grant our desires.
Later, as we know, St Peter committed a terrible sin.  He forsook and denied our Lord in the hour of his greatest need.  The very next time the Gospel shows them together,  St Peter is jumping into the sea to get to our Lord before anyone else.  He knew his Master so well that he was certain of his forgiveness.  And we in our foolishness hang back, and will not go to our Lord when we have committed some fault, and imagine he will not forgive us.  It is such a complete misunderstanding of his character.
After our Lord’s resurrection St Peter and St John went to his tomb and found it empty. They couldn’t see any use in remaining beside an empty tomb, so they went away.  That was good logic,  but it was not good enough for Mary Magdalene.  Her heart told her to stay there, and in dealing with God, the logic of the heart is the best.  So our Lord sent two angels to comfort her. But angels were no comfort to Mary.  She wanted our Lord and no one else.  She turned her back on the angels and wept.  Then Jesus could resist her no longer.  He came himself, but he did not allow her to recognise him at first.  Pious books tell us that this was because her faith was not perfect.  I think we may rather take it that our Lord disguised himself because he felt just as we ourselves feel, when we play a little trick upon someone we love.  He wanted to hear what she would say.  He wanted the joy of hearing her speak about him, and the happiness of giving her that glorious surprise. 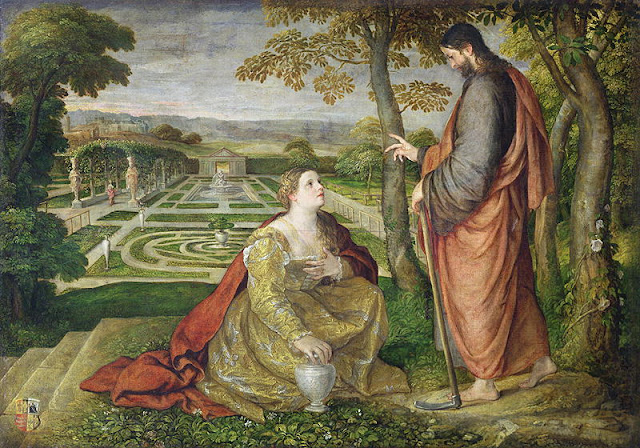 So he asked her, “Woman, why weepest thou?”  She, thinking it was the gardener, said, “Sir, if thou hast taken him away, tell me where thou hast laid him.”  She did not even name him.  There was only one person in the world for her that day.  Then Jesus was conquered.  He could not leave her in sorrow a moment longer.  With sweet playfulness, entirely loving and human, he said to her “Mary!” “Rabboni! My dear, dear Master!”.  She seizes his feet and covers them with kisses.  Our Lord smiles upon her.  How wrongly his next words are translated “Do not touch me”.  He had allowed her to kiss his feet and wash them with her tears when she was a sinner; is it likely that he would repel her now?  Take the passage in its beautiful simplicity,  as the Greek text allows,  “Do not keep hold of my feet for ever.  You need not be afraid; I am not going up to heaven this moment.  You shall see me again.  But let our friends share in our joy.  Go and tell the Apostles and Peter.”  How human our Lord is – how just like ourselves.  He cannot resist love, and he takes such delight in giving happy surprises to his friends.  We can see the playful smile on his face as he watches Mary before she recognises him.  Is it difficult for us to love such a Master?

'Be as a little child' - spiritual direction.

‘The character of our blessed Lord is entirely simple, straight, transparent, and he wants us to be the same.  The more childlike and direct we are with him, the better pleased he is and the more he can do in our souls.  So take your heart to him quite simply, with its weakness, fears and difficulties, as the Apostles did.  If your dispositions are very imperfect, tell them to him without fear, and ask him to put them right, and he will certainly do so.  Ask him for the strength you need and he will certainly give it to you.  Take as your model the one he gives you – a little child; for our Lord meant exactly what he said, as he always does. 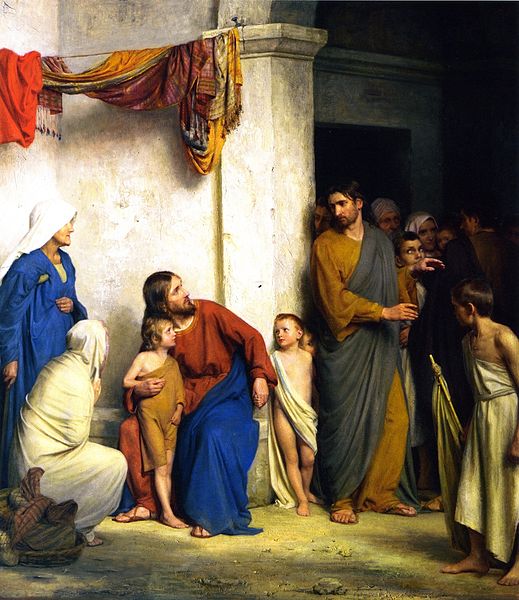 You cannot have too much confidence in him.  You cannot abandon yourself too completely to his love.  If you do so he is bound in honour to take great care of you, and you may be sure he will do so.
There is no narrowness, pettiness, rigidity, hardness, or formality in God.  All that is in ourselves – in our foolish imagination of him.  Domine noverim te.  Domine voca me.  Quis sicut Dominus Deus noster?
Don’t be guided by spiritual books in your intercourse with our Lord, if in any way they cramp your loving, reverent freedom of intercourse with him, or tend to sow the least distrust of him in your soul.  Ask him to teach you himself what he is like, and go to the Gospels in which he has left us the inspired description of his character and methods.’