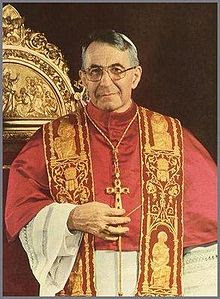 'The eldest child of working class parents, with two brothers and one sister, Albino Luciani was born on October 17, 1912, in the town of Forno di Canale, in the Dolomite Alps of north-eastern Italy.
He attended seminary in the town of Feltre and graduated in philosophy and theology at the seminary of Belluno, a city in the Dolomite foothills, and  the home town of nineteenth century Pope Gregory XVI. He was ordained priest in 1935, and  returned to his home region to work as a parish assistant, a teacher of religion in a 'mining technician's' school, and a teacher of dogmatic and moral theology at the Gregorian Seminary in Belluno.
In 1948, he was appointed by the Bishop of Belluno to oversee catechetics -  the teaching of the faith -  in the provincial diocese, later recounting his thoughts and experiences in a book, ‘Catechism in Crumbs’.
In 1958 Pope John XXIII appointed him Bishop of Vittorio Veneto, a local diocese at the foot of the Alps, and subject to Venice. Pope Paul VI promoted him Patriarch of Venice in 1969 and named him a cardinal in 1973.
He was elected the 263rd Pontiff of the Roman Catholic Church on August 26th, 1978, in one of the shortest conclaves in Church history.
The sixty-five year old Luciani adopted the name John Paul I. Thirty-three days later he died unexpectedly in his sleep.'
He once said of himself: “I am only a poor man, accustomed to small things and silence.”
Whilst Patriarch of Venice,  he wrote a number of open letters to illustrious writers, fictional characters, and historical figures of the past. These were then published in book form in Italy in 1976, under the title ‘Illustrissimi’.
Cardinal Luciani was first and foremost a pastor of souls, and these letters were written to convey the truths of the Faith, but written in a light and sympathetic manner, reflecting both  the writer's compassion for the weakness of men, and his joyful faith and trust in the love and mercy of God
Reproduced below is his letter to Trilussa, (pseudonym of Carlo Alberto Salustri), a Roman poet (1871 –1950), whose satire, often light-hearted and good-natured, at times became bitingly sarcastic about what he saw as the hypocrisy, malice, and egoism of the contemporary world. His best known works are 'Fables' (1922) and 'Jove and the Animals'(1932)
Dear Trilussa,
I have re-read that melancholy and autobiographical poem in which you tell of being lost, at night, in the middle of the woods, when you met an old blind woman, who said: "If you don’t know the road, I’ll come with you, because I know it!"
You were surprised: "I find it strange that someone who cannot see, can guide me".  But the little old woman took your hand, and said firmly: "Come along".
This is faith.                                                                                                                                                           I agree with you to some extent: faith is truly a good guide, a dear and wise old woman who says; 'Set your foot here, take that path up there.'  But all this happens when faith has already established itself in our minds, and become a firm conviction, and from there directs and guides the actions of life.

The conviction however, must first be formed and planted in the mind. And here, my dear Trilussa, is our present difficulty. The journey of faith today is not a mere walk along a woodland path, but a journey at times difficult, often dramatic, and always mysterious.
It is difficult in the first place to have faith in others, accepting what they say just because they say it. The student hears the teacher say that the earth is 148 million kilometres from the sun. He would like to check this but how can he?  He summons his courage and with a deliberate act of faith, accepts: 'Our teacher is honest and well informed, I'll trust him.'
A mother tells her son about earlier years, of sacrifices
made to protect him and  care for him. "Do you believe me ?" she says. "Will you remember how much I've done for love of you?"
“How can I fail to  believe you ?” the son answers, “I'll do all I can to be worthy of your love."

This son must feel tenderness and love towards his mother as well as trust in her; only thus will he know the impulse to self surrender, the commitment to life.
Faith in God is something similar. It is a filial 'yes' to God, who tells us something about His own intimate life: it says 'yes’ to the things narrated and to Him who narrates them. The man who says 'yes' must have not merely trust, but also tenderness and love, and must feel like a small child.
'I'm not the type who knows everything, who has the last word on everything, who checks everything. Perhaps I am used to arriving at scientific certitude with the most rigorous laboratory controls; here, on the contrary, I must be satisfied with a certitude which is not physical, not mathematical, but depends on good sense, on common sense. And more than that, by trusting in God, I know and accept that God may come into my life, and direct and change it.'
In his ‘Confessions’, my dear Trilussa, Augustine is far more impassioned than you are in describing his journey towards faith. Before saying his total ‘yes’ to God, his soul shudders  and writhes in painful conflicts. On one side there is God, inviting him; on the other, his old habits - his former 'friends',  who 'tug gently at his clothing of flesh', whispering, 'Dost thou cast us off? Remember the moment we leave you, that certain things  will no longer be allowed you - forever!’
God urged him to hurry, and Augustine  pleaded, ’Not at once, just another moment’, and he goes on for weeks in a state of indecision and inner turmoil, until assisted by a powerful thrust from God, he summoned his courage and made up his mind.
As you see, Trilussa, in the human drama of faith there is a
mysterious element; the intervention of God. Paul of Tarsus experienced it on the road to Damascus and describes it in this way: ‘That day, Lord, you seized me: through your grace I am what I am.'
Here we are in the heart of the mystery. What, in fact, is this grace of God, and how does it operate? It is so difficult to say! 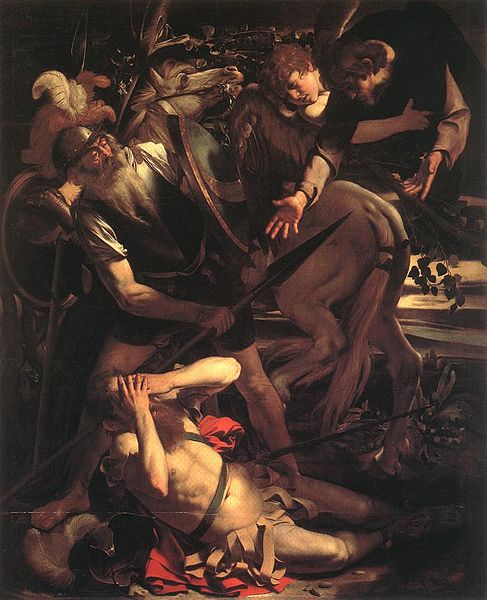 Conversion of Paul on the Road to Damascus (Caravaggio)
Imagine that the unbeliever is asleep; God wakens him and says, ‘Get out of bed!’
Imagine that he is sick; God puts some medicine in his hands, and says, ‘Take this!’
The fact is that a non-believer, all of a sudden, without having thought of it, finds himself reflecting at a certain point on problems of the soul and of religion, and is potentially open to faith.
After this intervention, which happens ‘without us’, God does other things, but ‘with us’, that is to say with our free collaboration. Waking us from our sleep is done by Him alone, getting out of bed is up to us, even if we need His help in the first place.
The grace of God, in fact, has force, but does not mean to force us; it has a holy violence, but intended to make us fall in love with the truth, not to have our freedom violated. It can happen that once wakened, invited to rise, taken by the arm, some may instead roll over on the other side, saying ‘let me sleep’.
In the Gospel we find cases of these sort. “Come follow Me,” Christ says, and Matthew rises from his work and follows Him; another however, though invited, answers; “Lord, let me go first and bury my father,” and never shows up again.


These are people, Christ reflects sadly, who put their hands to the plough, then turn back. This explains how there is a whole range in belief, going from those who have never had faith, to those with too little faith, those who are lukewarm and feeble in their faith, and finally those who have a faith that is fervent and productive.
But this explains only up to a point, my dear Trilussa. Why do some of us not believe? Because God did not give us His grace.
But why did He not give us His grace?  Because  we did not correspond to His inspirations.
And why did we not correspond to them? Because being free, we abused our freedom.
And why did we abuse our freedom? This is the hard part, dear Trilussa; and something I don't understand.
I prefer to think of the future rather than the past and follow Paul's invitation: “We exhort you not to receive in vain the grace of God”

Dear Trilussa!  Manzoni describes as a ‘glad marvel and a banquet of grace’ the return of the Unnamed to the faith.  Manzoni knew what he was writing about; he also had ‘returned’. 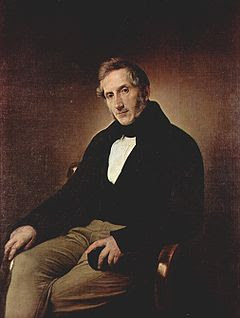 Alessandro Manzoni (1785-1873) - Italian Poet/Novelist
The banquet table is always laid, available to us all. As for me, I try to profit from it every day, propping up the life of faith that the previous day's sins have toppled. I wonder if Christians who, like me, feel themselves sometimes good, sometimes sinners, will 'agree to be good dinner-guests with me'.
Ack. 'Illustrissimi' - Letters from Pope John Paul I -Albino Luciani.  Collins, London. 1978.
Posted by umblepie at 22:28 No comments: