'Israel Folau' - 'blessed are they who suffer persecution for justice sake, for theirs is the kingdom of heaven'.


Folau has apparently previously posted remarks in a similar vein on his personal website, which aroused controversy, and for which he received an official warning from the Australian RFU. His most recent comments above, aroused even more controversy, and as a result Folau has been banned outright from playing Rugby union in Australia, with automatic exclusion from the national team, and essentially deprived of his livelihood. 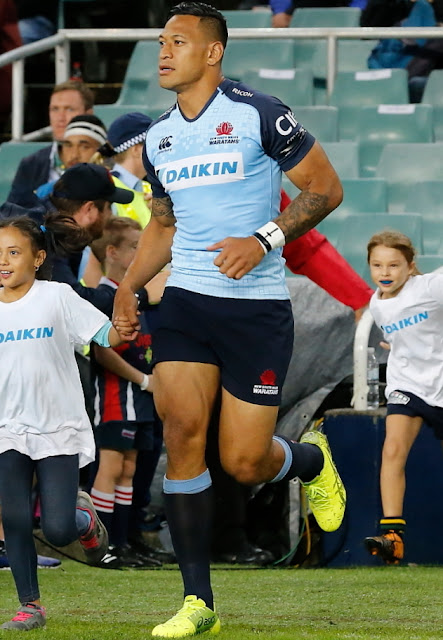 
A few observations are surely called for:-


1. Folau’s comment is taken directly from the Bible, the word of God.


3. It has been taken up by the Australian Rugby Union authorities, yet It was not aimed at them. They have made it an issue on which they consider that they have the right to intervene and authority to adjudicate. But what gives them this right?  Furthermore have they the right to deprive a man of his livelihood for quoting the word of God?


4..An English top class rugby player, Billy Vunipola, has expressed his agreement with Folau’s comments, as a result of which  he has been disciplined by his Club (Saracens) because of his Christian views.  Again what right does this Club have to act in this way?


5. The silence from ‘supporters’ of Folau’s views has been deafening!   Folau’s outspokenness may have been embarrassing to some, but what he has said is Christian teaching, yet I have not seen one letter or article of support in the national press. Of course this might just be because the Press have chosen not to publish them, although they may well have received them.


6 This matter has been headlines in the national press for nearly three weeks, yet I have not seen any support for Folau’s statement from representatives of the Christian hierarchy, of any denomination. This matter is newsworthy and  offers a real opportunity  for God’s word  to be preached to the world.


7. Folau’s statement does not advocate violence in any shape or form. It clearly is unpopular in certain quarters, no doubt  because  it advocates a way of life which flies in the face of today’s hedonistic and materialistic culture which prefers to ignore God and His commandments. Much of our society is uncomfortable when faced with unpalatable moral truths, to which it has no answer except unjust punitive reprisals. The cruel and barbaric punishment inflicted on Jesus Christ, the Son of God and the founder of Christianity, 'the Way, the Truth, and the Life', is the Cross that all Christians have to share in one way or another.
8. If the comment had been made by a different person unknown to the media, whose sole intention was to preach the word of God, as indeed was Fallou’s intention, would we have heard anything about it?. I doubt it.


9. Australian sport was recently in the headlines because a Tennis centre named after the famous woman Australian tennis player Margaret Court, eleven times winner of the Australian Open tennis championship, has been  the source of public controversy, with some players demanding that the Centre has a change of name. The reason for this is that Margaret Court, now in her seventies, had expressed no support during or after her playing career, for the LGBT cause, and in fact has alleged that since the legalisation of same- sex marriage in Australia,  lesbianism had become an unedifying and  undesirable fact of life on the women’s tennis circuit. The ensuing controversy has now reached the stage whereby  players opposed to Margaret Court's outspoken beliefs, are now refusing to use this centre, unless and until the name had been changed.
10. In Folau’s case, I have seen  on the internet,  comments  from sportsmen and women  worldwide  criticising  Folau. I have no doubt that he has at least as many supporters as critics, yet I have not seen any of their  comments published.


11. It is interesting to note how much  publicity the BBC has given this matter, clearly attributing  to it great significance. On the internet BBC Sports page, Rugby Union section,  it has published the same report about Folau  for 17 days, and it has only been removed in the last day or two. Additionally it has published details of  the punitive action of the English RFU against the Saracen's player, Billy Vunipola,  who had the temerity to support Falou. This report has been on the same sports page as above for 13 days, and is still there.There have also been other criticisms of Folau, creating the  impression of a witch-hunt against sportsmen and women who dare to profess their Christian faith? In the past, personal religious beliefs have rarely if ever, been a problem in sport, with personal religious beliefs  accepted and respected, and the game goes on.

12.It may be that Folau's statement was unusual in that he spoke God's word without fear or favour, somewhat rare in our  western society, but not so in many other parts of the world. But why has Folau been singled out among many other Christian proponents of Christ's teachings? Why is Australian Rugby Union so incensed? What has it got to do with them that Folau chooses to proclaim Christ's teachings on his personal website?

13. Is it that their criticism  applies  to the inclusion of 'homosexuality' in the list of sins? I suppose that if a homosexual lifestyle is not considered sinful, then to say that it is will be criticised   If people hold this view, then so be it, but there is no need for a visceral war of words, or threats to one's job  This situation is not new, neither is it unique.  Folau has been openly preaching the Christian message for years, a message which  itself has been around for 2000 years or so,  and yet suddenly it has become an international issue! Is there an agenda in this matter, an agenda pursued perhaps by the LGBT lobby, who continue to actively try to impose  the homosexual life-style on a generally  unsympathetic society, regardless of the cost to religious belief and individual conscience?

14. This whole matter is ongoing and there could conceivably be many developments. Is the  sandwich-board man with his message 'The Wages of Sin is Death' likely to fall foul of  local business interests? What about the preacher in the pulpit doing his job and what he believes in, repeating the very message published by Folau, and  leading souls to God? He may even publish details of his sermon on-line, to be seen by perhaps thousands of viewers, who will either accept or refuse his message. End of story!  So why the unnecessarily heavy-handed and punitive action against Folau?

15. For those who appreciate appropriate biblical chapter and verse,  I include  numerous references relating to those sins high-lighted by Folau.

I feel somehow, that this post is incomplete, in that it presents certain questions but almost certainly does not  provide the answers. I must admit that I wanted to express in writing some of my thoughts relating to this matter, without necessarily being clear in my own mind exactly what these thoughts were. I have done this to the best of my limited ability, and am aware that I have only  touched the tip of the iceberg. I do think that this situation raises serious questions, viz. freedom of speech, the right to criticise on matters of conscience and principle, the powers of state and other authorities  to become involved in controversial matters, what constitutes appropriate action in any particular case and the reasons governing it, etc .etc. Last but not least, I feel some satisfaction in being able to express my support and admiration for Israel Folau , an inspiration to us all. May God bless him.

Posted by umblepie at 02:43 No comments:

Labels: 'Israel Folau'-''Blessed are they who suffer persecution for justice sake, for theirs is the kingdom of heaven'
Newer Posts Older Posts Home
Subscribe to: Posts (Atom)