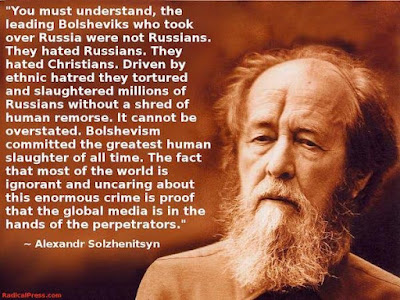 ‘The Polish churches, not only in Moscow but all over Siberia, were crowded with men as well as women; and I always felt better, physically and spiritually, after visiting them. They were calm asylums for the sane in a country which had gone mad.  They were altars where one could seek sanctuary from the poisoned shafts of ideas more deadly than the spears of the feudal age, from Kropotkin’s fascinating theories of licence, as well as from Lenin’s stern dogmas of oligarchic tyranny.  Even their severe Latin architecture and the plain, veritable cross of Rome on the steeple were a relief after the twisted oriental style, barbaric colours, and distorted crosses of the Byzantine churches; while, on the other hand, the warm glow of life which animated them was an equally welcome contrast to the chill of death which pervaded the ‘Reformed’ chapels. They were mute but eloquent symbols of a greater and an older International than Lenin’s, of an Institution which had witnessed the fall of the Roman Empire, which had survived the dreadful menace of Islam, which had seen many movements madder even than Bolshevism, rise and rage for a season, and then disappear so completely that the man in the street today does not know their very names.
I had visited many of those churches during the course of my journey, and had found them open when the others were shut, had found the Catholic priest at his post when all the other ministers of religion were fleeing or had fled. The Red torrent had thundered down on them, the leaping spray had hidden them from sight, and the raging waters had cut them off, but when I came back they still stood like the rock on which they are built.  I thought with awe of that tremendous prophecy which I had seen on the dome of St Peter’s:  “The gates of Hell shall not prevail”.
There was an indescribable comfort and reassurance in seeing exactly the same service as is to be seen in Ireland, Tyrol, Westminster, the Vatican, France, Valparaiso, the Islands of the Outer Hebrides, and every part of the orbis terrarum.  Semper eadem.  One heard in all these different places exactly the same Latin words leading up to that stupendous sentence pronounced at the Last Supper,  and followed by those simple, soldierly words of the Roman Captain which are engraven to the end of time on the memory of man.  Yet in each place the Church was no exotic, hothouse plant, but a national growth with its roots in the hearts of the people.  Even in Russia the congregations were made up not only of Poles but of Lithuanians, Ukrainians, White Russians, French, Germans, and Austrians.  Meeting once in Siberia a gentle young priest who had remained behind to share the fortunes of his flock, and knowing that Poles do not like to speak Russian when they can help it (though he turned out to be Lithuanian), I addressed him in the best Latin I could muster, and I shall never forget how his eyes lit up when he heard the sound of that stately tongue. Did it remind him of how Nero failed yesterday as Lenin will fail tomorrow?  Nor can I ever forget the Masses I have heard on dark, frosty mornings in isolated Catholic churches far in the heart of Red Russia, and how astonishingly the calm and dignity of the noble service contrasted with the mad roar of revolution outside.  The church was dark, save where the altar candles made the silvery hair of the priest shine like a nimbus and lit up the altar, evoking a picture of the same Sacrifice being offered in a dimly lit Roman catacomb in commemoration of Sebastian the Soldier or of Agnes the Virgin Martyr, while a tyranny as bad as Lenin’s howled itself hoarse outside.  To me the Catholic priests whom I met represented European culture, Christian civilization; and great indeed was the contrast between their scholarly discourse and the mad babble of the Bolsheviks into which I had again to plunge'. 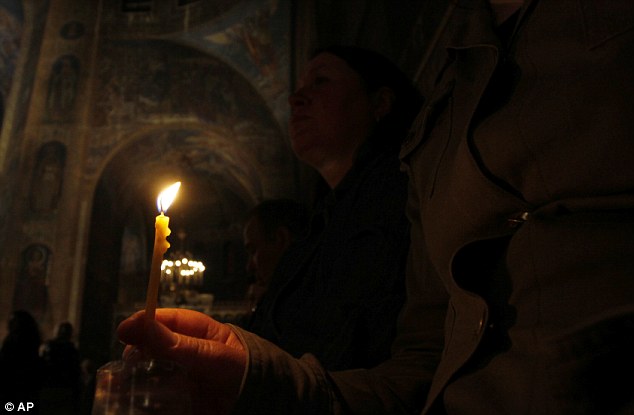 *******
The above extract is taken from ‘A Prisoner of the Reds’ by Capt. Francis McCullagh, being an account of his experiences as a prisoner of the Bolsheviks from January to April of the year 1920. I recently acquired an old (1923) copy of this book and have not yet finished reading it. The writer was of Irish birth and was a journalist by profession. As a war correspondent he had covered
the Russo-Japanese war for the New York Herald, the Turkish civil war of 1909, the Portuguese revolution of 1910, various Balkan wars, hostilities in Morocco, and the Italian invasion of Tripoli.
On the outbreak of World War 1 he was sent as a journalist to the Eastern front, where he reported from the Russian side. He then enlisted in the Royal Irish Fusiliers at the end of 1914, was posted to Gallipoli and spent most of the war in military intelligence. He was then posted to the British Military Mission to Siberia, which was assisting the White Russians in their struggle against the Bolsheviks. Captured by the Russians in early 1919, he persuaded his captors that he was a journalist rather than a British army officer, and was allowed to spend many months wandering around Russia before the increasingly suspicious Russian security services arrested him in Moscow. Under the 'Brest-Livotsk Agreement' he was repatriated to Britain where he wrote many newspaper articles on his experiences in Bolshevik Russia, and also completed this book ‘A Prisoner of the Reds’. 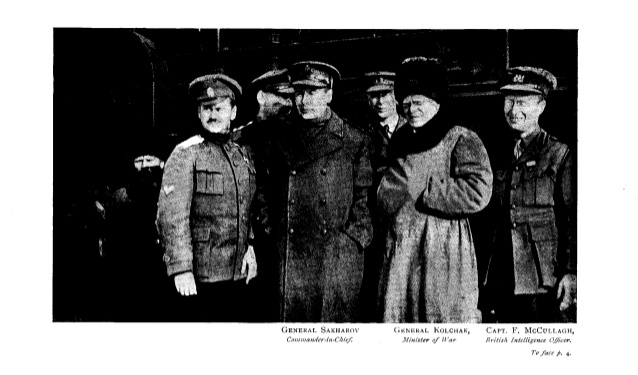 I have been fortunate in that I have managed to obtain four books (old copies) by McCullagh namely:-
‘The Bolshevisk Persecution of Christianity’, containing a detailed account of the staged State trial of  several prelates and priests culminating in the murder in custody of Mgr  Budkiewicz, and the sentence of death passed on Archbishop Cieplak, later commuted to life imprisonment to assuage world-wide condemnation of the the trial;
‘Red Mexico’ an account of the terrible persecution of the Church in Mexico in the 1920s, and the role of the United States government in aiding the Masonic Mexican government;
‘In Franco’s Spain’ being an account of events in Spain during the Civil War of the mid 1930s;
'A Prisoner of the Reds',  the book I am currently reading.
I am amazed and impressed by the achievements of McCullagh, a brave man by any standards, both physically and morally. As a journalist he was fearless in reporting the facts, with his Catholic faith shining like a beacon throughout his work. As a young man he attended a Seminary to test his vocation, but in spite of glowing reports from others, decided that he was not suited to the priesthood. Thereafter journalism  was his life. I strongly recommend these books, the early editions effectively primary source material for detail of some of the terrible persecutions of the Church in the first three decades of the 20th century. 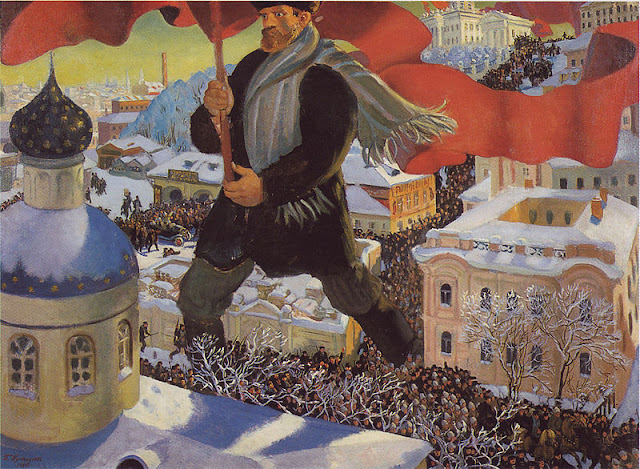 I hope to publish further posts on Francis McCullagh, in his day a renowned and highly regarded war correspondent, but now largely forgotten. He deserves to be rescued from obscurity, and  publicly recognised as the honest and fearless journalist that he was, and above all as a man who loved God and His Church and was not afraid to say so. In the above quoted passage, it is revealing to read his comments on the universal and traditional Latin Mass celebrated in the isolated Catholic churches in the heart of Red Russia, which gave him ‘indescribable comfort and reassurance’, and his experience of  'the calm and dignity of the noble service, contrasted with the mad roar of the revolution outside'. He was describing experiences of  nearly one hundred years ago, with the world a ‘maelstrom’ of bloodshed, violence, and increasing godlessness. Sadly the universality of the traditional Latin Mass is, in practice, no longer the case, and the use of the vernacular and the post Vatican 2  'Novus Ordo' Mass – with variations depending on the country and the celebrant, perhaps diminishing that sense of  'spiritual unity' once so universally evident in Christ’s Church. The world today is threatened with destruction, physical and moral, with ungodly and powerful nations deliberately following the wide road that leads to perdition, with Christ’s Church persecuted and vilified by enemies both outside and within the Church itself. The world today is as much a maelstrom of bloodshed, violence, and godlessness, as it was in 1920, but sadly the Church now seems somehow less visible, less united, and sometimes almost deferential in its attitude to the world. Nevertheless we live in certain hope that Christ will never abandon His Church, and that the gates of Hell will never prevail. Glory to God in the Highest!

'Holy Mary, Mother of God and mother of mercy, pray for us and for the faithful departed'
Posted by umblepie at 00:36 2 comments: