Dear readers, I must apologise for the dearth of posts over the past few months. I have been struggling with cataract problems in both eyes, but thankfully these have now been successfully treated, and I can now read and type, which is a real pleasure. I am keen to post without further delay, and have taken the liberty of re-posting an article which appeared on this site about three years ago. I confess that I never tire of Caryll Houselander's  poetry, and I ask you to bear with me, thank you.

******************
'Frances Caryll Houselander was born in Bath, England, on Sept 29, 1901, the second of two daughters.  She was not expected to survive for more than a day, and was immediately baptized,  given the name ‘Frances’ after her uncle, a gynaecologist who helped deliver her, and ‘Caryll’,  after the yacht on which her mother had spent the last months of her pregnancy!
She went on to survive her first day, and indeed many more after that, though her health continued to be poor throughout her life.
When she was 6 years old, a family friend persuaded her mother to have the children baptised in the Catholic faith. Although little formal religious education followed her reception into the Church, her mother encouraged a deep sense of piety and devotion in the home, and Frances, a devout child,  made her first confession and Holy Communion when she was just seven years old.
Two years later, her world was shattered when her parents  separated. Though they were never  divorced, the separation was to be a permanent one. For the next several years, she changed homes and schools, never fully settling in one place before she was moved to the next.
Her erratic health led her doctors to advise that she avoid all class work, and,  by the time she returned home in 1917, her formal education was virtually non-existent.  During her years in the convent schools, she experienced three religious visions, which led to a personal and absolute conviction that she had been called by Christ to give recognition to the reality of His loving Presence and Image in all people, particularly the suffering and poor of this world, and to convey the realisation and awareness of this to all those with whom she came into contact, personally and through her writings. Frances had a great affinity with young children, and during her life wrote and illustrated children's books, always revealing a simple delight in the love of God and His creation.
When the war ended, she attended art school and it was during this period that she drifted from the Catholic Church. She explored the Orthodox Church among others, but found them all wanting, and craving for peace of soul and longing for the Sacraments, she returned to the Catholic Church; she was then twenty-four years old.
Advised to concentrate on her writing, she  began to write articles and illustrate for the ‘Children’s Messenger of the Sacred Heart’, often on an unpaid basis. Her work ultimately led to her making the acquaintance of the Catholic publishers, Sheed and Ward, who were subsequently to  become the major publishers of her many books.
Always willing to open her home and her heart to those in need, she was frequently physically and emotionally  overwhelmed by those who sought her advice, yet she remained reluctant to turn people away.
Msgr. Ronald Knox, a contemporary, and admirer of Houselander, recognized her tremendous gift of insight, and was later to say, "She seemed  to see everything for the first time, and the driest of doctrinal considerations shone out like a restored picture when she had finished with it."
Her popularity and success in healing the hurts and the hearts of many can be measured by the support of such eminent physicians as Dr. Strauss, later President of the British Psychological Society, who sent patients to her. His explanation was that "she loved them back to life".
Her impact, both literary and personal, was due above all, to the intensity of her vision of the suffering Christ, a vision she expressed with utter sincerity and immediacy and, on occasion, with breath-taking luminosity. Indeed, she can best be described not just as a writer, nor even just an artist, but as a mystic and a visionary, even in the tradition of Julian of Norwich, Catherine of Siena, or Teresa of Avila, which would explain how she was able to communicate so directly and movingly to her large reading public, and accounts for her extraordinary success in counselling British and foreign children who had been traumatized by the war.
Not gregarious by nature, she nevertheless radiated gaiety and a  sense of fun; her wickedly funny tongue often provoking as much hilarity among her intimates as it caused her remorse.
She was unquestionably a genuine mystic whose frailties were transformed into real strength and whose neuroses became the means whereby she was able to join her sufferings with Christ on the cross. It was as though her burning love of God overflowed for the refreshment of all who came in contact with her.
"She seemed to possess a well that never ran dry for anyone but herself. She gave of her food to feed the hungry, her time to counsel those in need, her energy to write countless letters, articles and books, and ultimately her health for the health and well-being of others. She spent years attending to the rigorous demands of her ailing parents, and, having been plagued by ill health her entire life, had become accustomed to pain and slow to address her own physical ailments. Her lack of self-concern, however, which extended to everything from her looks, to her diet, her sleep, her health, her living quarters, etc., took its toll."
During her last years, she worked tirelessly to complete books, write letters, strengthen the works of charity she had begun, and minister to the many mentally ill children who were sent her way'
She died on October 12, 1954, from breast cancer.
"The wonder of Frances Caryll Houselander is found in her humble willingness to suffer with Christ, to let Him transform her flawed and sinful nature into a divine work of art."
Ack.  Karen Lynn Krugh / Catholic Culture.org
Ack.  Margot H. King - currently working on biography for Peregrina Publishers.
Ack.   Robin Maas - Caryll Houselander, an appreciation.
www.ewtn.com/library 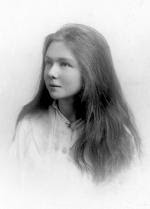 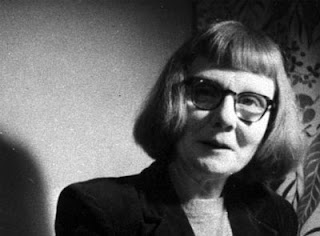 In 'Mathew Speaks', Caryll Houselander reveals a deep spirituality enveloping a sympathetic and sincere humanity. Through the thoughts and words of  Mathew, the tax collector, she reveals the hopes and aspirations of his Jewish community who hear and see Jesus, probably for the first time, when he visits their township. The expectations of the young and the older people concerning the coming Messiah, are of this world rather than the next. They believe that the Messiah will restore worldly power and glory to the Jewish people, although Mathew knows that this will not be the case. Caryll Houselander, through the mind of Mathew, gently explores the fears and expectations of the ordinary people, gradually introducing the overwhelming concept of Christ's love for all mankind. The concept of 'Christ being in all men' is one which Houselander preached and practised throughout her life. A similar poem by her, 'Philip  Speaks', explores the miracle of the feeding of the five thousand, as experienced through the mind of  Philip, who Jesus made responsible for distributing the loaves and fishes to the multitude. This is a most moving poem which I recommend, and I leave a link at the end of this post for those interested.

Ack.  'The Book of the Saviour'
an anthology published by Sheed and Ward
London and New York 1952
************
N.B.    link to 'Philip Speaks'
"Philip Speaks" by Caryll Houselander
*****************
On a rather different tack, I wish to  share the truth of  current events, brought to us courtesy of  the Expose news web-site. This is one of several reliable and truthful sites, correcting the  misinformation and downright lies  published by the main-line media, which for many people, is their only source of information.. I find it incredible that so many people still seem to have little or no understanding of the 'Great Reset', which is the evil driving force behind the destructive forces threatening our very existence.
link:-  https://expose-news.com
https://expose-news.com/2022/09/05/sunak-blows-the-whistle-on-whos-been-controlling-uk/
Posted by umblepie at 00:07