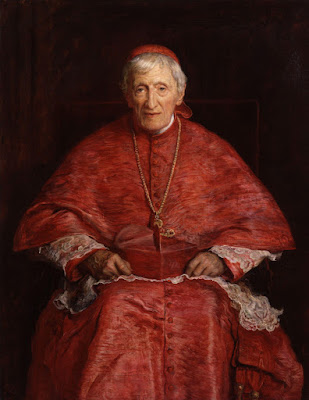 The Pillar of the Cloud

Keep Thou my feet, I do not ask to see

The distant scene, one step enough for me.

I was not ever thus, nor prayed that Thou

Shouldst lead me on.

I loved to choose and see my path; but now

I loved the garish day, and spite of fears,

Pride ruled my will: remember not past years.

So long Thy power hath blessed me, sure it still

Will lead me on,

O'er moor and fen, o'er crag and torrent, till

The night is gone;

And with the morn those angel faces smile,

Which I have loved long since, and lost awhile.

Originally an evangelical University of Oxford academic and priest in the Church of England, Newman increasingly favoured the High Church tradition of Anglicanism. He became one of the leaders of the Oxford Movement, an influential and controversial grouping of Anglicans who wished to absorb into the Church of England, many Catholic beliefs and liturgical rituals held and practised before the English Reformation. In this, the movement had some success.  After publishing his controversial "Tract 90" in 1841, Newman later wrote, "I was on my death-bed, as regards my membership with the Anglican Church." In 1845, Newman, joined by some but not all of his followers, officially left the Church of England and his teaching post at Oxford University, and was received into the Catholic Church. He was quickly ordained as a priest, and continued as an influential religious leader, based in Birmingham. In 1879, he was created a Cardinal by Pope Leo XIII, in recognition of his services to the cause of the Catholic Church in England.  He was instrumental in the founding of the Catholic University of Ireland (CUI) in 1854, although he had left Dublin by 1859. Over time, CUI became better known as University College, Dublin.

Newman's beatification was proclaimed by Pope Benedict XVI, on 19 September, 2010, during his visit to the United Kingdom. His canonisation was officially approved by Pope Francis on 12 February, 2019, and took place on 13 October, 2019.

He is the fifth canonised Saint from the City of London; behind  Thomas A'Becket (born in Cheapside), Thomas More (born at Milk Street), Edmund Campion (son of a London bookseller), and Polydore Plasden (of Fleet Street).

(With ack. to Wikipedia)

'Christendom in Dublin', a classic novel written by G.K Chesterton, records his impressions of the 31st Eucharistic Congress held in Dublin in 1932.

'He is the Boy' is an extract.

‘I have little doubt that the return of liberty and prosperity to Ireland will mean the development of that Christian craftsmanship, in which Our Lady once taught the world in the decorative designs of the Dark Ages. Any impression so atmospheric must appear arbitrary, and it would be idle to mention the multitude of small experiences that have seemed to me to point to such a destiny. I will only mention two things out of a thousand; one an old story which I heard and even recorded long ago; the other a small incident that quite recently happened to myself’ but in both of which is expressed with a certain emotional exactitude the shade of fact and feeling that I mean The first is a story that I heard in Donegal twelve years ago; but I know nothing of the origin of the story. It told how someone had met in the rocky wastes a beautiful peasant woman carrying a child, who on being asked for her name, answered simply:“I am the Mother of God, and this is Himself, and He is the boy you will all be wanting at the last. I had never forgotten this phrase, which expresses the spirit of which I speak in a language which is a natural literature; and I remembered it suddenly long afterwards, when I fancied I had found something that expressed it also, not in literature but in sculpture.

I was looking about for an image of Our Lady which I wished to give to the new church in our neighbourhood, and I was shown a variety of very beautiful and often costly examples in one of the most famous and fashionable Catholic shops in London. It was a very good shop, and the proprietor was not to blame if the nature of the find was something of a parable. It is the glory of the great Cult of Mary that she has appeared to painters and sculptors under a variety of bodily types almost wider than the actual variety of all the women in the world. She has been the patroness of so many lands and cities that she has become the centre or the prop of every scheme of ornament or school of architecture; and her garments have been made of all the materials of the world.

Here there was everything, from what some would call the conventional dolls of the Repository to what some would call the harshest caricatures of the Primitives. But somehow I felt fastidious, for the first time in my life; and felt that the one kind was too conventional to be sincere and the other too primitive to be popular. There were the types of the bronze Byzantine gloom and types of the cereal Flemish exuberance; extravagances of Renaissance drapery, wrought in enamel or in metal, sprawling like a wheel of wings yet poised like a pillar; delicate figures in ivory or dark figures in ebony; all the multi-form manifestations of the most profound inspiration of the arts of our race. But, for some reason, as I have said, they left me not indeed cold, but vague, and I ended prosaically by following the proprietor to an upper floor, on some matter of mere business; the receipting of an old bill or what not. But the upper room was a sort of lumber room, full of packages and things partially unpacked, and it seemed suddenly that she was standing there, amid planks and shavings and sawdust, as she stood in the carpenter’s shop in Nazareth. I said something, and the proprietor answered rather casually: “Oh, that’s only just been unpacked. I’ve hardly looked at it. It’s from Ireland!”

The colours were traditional; but the colours were not conventional; a wave of green sea had passed through the blue and a shadow of brown earth through the crimson, as in the work of the ancient colourists. The conception was common and more than common, and yet never merely uncommon She was a peasant and she was a queen, and in that sense she was a lady; but not the sort of sham lady who pretends to be a peasant, nor the sort of sham peasant who pretends to be a lady. She was barefoot like any colleen on the hills; yet there was nothing merely local about her simplicity. I have never known who was the artist and I doubt if anybody knows; I only know that it is Irish, and I almost think that I should have known without being told. I have heard of one other man who felt as I do, and went miles out of his way at intervals to revisit the little church where the image stands. She looks across the little church with an intense earnestness in which there is something of endless youth; and I have sometimes started, as if I had actually heard the words spoken across that emptiness 'I am the Mother of God and this is Himself, and He is the boy you will all be wanting at the last.'

The Catholic Church in Ireland has suffered terribly over recent decades. The disastrous liturgical and other changes imposed after Vatican II, together with a  dramatic secularisation in Society and the clerical abuse scandals, have severely damaged the Faith to the extent that the Church today in Ireland compared to 1932 when Chesterton wrote the above, is but a shadow of its former self.

We Catholics in the United Kingdom owe a tremendous amount to our fellow Catholics from Ireland, who over many decades have been the backbone of many of  our parishes and Catholic organisations. We pray for our Irish friends and for the Church in Ireland.

Labels: 'The Pillar of the Cloud', and 'He is the boy'