'Lord it is good for us to be here'

This post is taken from the writing of  Rev. James McNally, who in his book ‘Make Way for Mary’, explores the Gospels of the Sundays of the year, emphasising  the role of Mary in guiding us along the path to her divine Son.

No joy in life is comparable to the joy of the Catholic who is familiar with the Son of God and His Virgin Mother.  This is neither dream nor fantasy.  Syllogisms are unnecessary for an ascertainment of this truth.  The delight of intimacy with heaven is not pretentious; it demands no glitter, none of the theatric.  It is simply there; and they who have walked in the garden of God can give ample testimony to the exultant heart.

“Lord, it is good for us to be here.”  So spoke St Peter to Jesus on Mount Thabor, when the Lord was transfigured.  Peter, James, and John had been privileged to see Jesus appear in outward brilliance and splendour.  So beautiful and enthralling was His appearance and so radiant, that the apostles were enraptured. 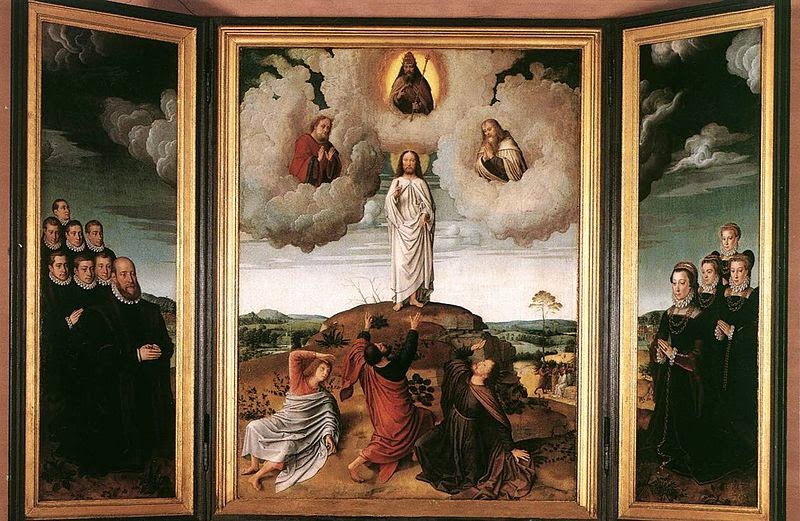 “Lord, it is good for us to be here.”  Ever since that day on Thabor centuries ago, many, many hearts have felt that self-same way.  Hearts in the priesthood and religious life that chose the paths to which the world is blind; hearts that disregarded passing fantasies and frivolities; hearts that saw in this world’s glamour only emptiness and want; hearts that thirsted for clear water, crystal streams; hearts that yearned for love, but for a love more true than man can offer; hearts that went near Mary long ago, and felt the strong attracttion of her presence; hearts which found through Mary they could come to God! Yes, many hearts have for a moment felt occasionally that very same way.  There is no pleasure to compare with it, no delight so rare, no sentiment so much above things earthly.

On Mount Thabor, Jesus was transfigured for a reason.  He wished to strengthen the faith of the apostles, to whom of late He had more clearly revealed astounding things.  Jesus had told them of the suffering and death He was to undergo, as well as of the glory that would be sometime His.  He had told them of His divinity in rather certain terms, and Jesus wished to give them added evidence that He is God, so that their faith would not be shattered when events grew difficult for them.

The transfiguration was not of long duration. It was over in a little while, but it had served its purpose. Men who had followed Jesus were rewarded with the radiance of God; they had seen a miracle that would not then be shared by others; they had witnessed evidence of divinity in a more comprehensive way, although it stunned them; their faith was increased and renewed.

And good it was that the apostles were granted this singular and blessed favour. They were yet to face the treachery and storm of Jerusalem; they were to see their Master basely mortified and put to death, themselves, placed in jeopardy.  This glory of the Master was allowed them, so that, when Jesus looked no longer like the Master, they would remember Thabor and remain convinced still of Christ’s divinity. Crucifixion of Christ (1491) by Hans Memling(Flemish)

The same it is today with those who undertake to follow Jesus and His Mother. Life in the priesthood or religion is not easy.There must be fidelity to little things, and constant acceptance of unending problems; the promise of obedience kept all the way through manful, womanly years; continued generosity, even to the insincere, and strong attempts at preaching, teaching; good example always and a desire for the young; kindness towards the aged, the infirm, the dulcet tones when people die.  There must be love, a greater love than ever lovers know; there must be prayer and battling in defence of ten commandments;  there must be the conquering of strong desires, and strife to save one’s soul; there must be loyalty to Jesus, and the spirit of the cavalier toward Mary.

Because of this endless procession of loyalties, Jesus sometimes affords His chosen men and women for a moment a taste of joy divine, a taste that crowds their sensibilities.  It may be during thanksgiving after Mass; it may be while walking crowded streets at eventide; it may be for a moment in the classroom, or in frightening moments when people pass away. It may be anywhere and anytime; but suddenly they feel the ravishment of Christ Almighty’s presence!  Words can scarce be uttered, but in the soul there is a memory of Thabor: “Lord it is good for us to be here." 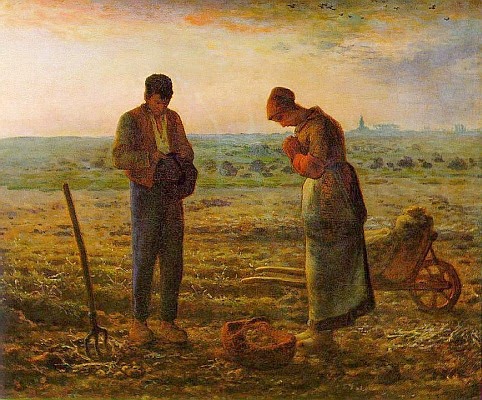 Somehow we may feel that these privileges are reserved for only those in the priesthood or in religious life.  It is true that for the most part they are found there, and for a logical reason.  But these favours are not excluded from the world of the laity and from people’s hearts. The history of the Catholic Church is studded with the names of heroic men and women, who, choosing the path of Martha, have made Jesus and Mary the attraction of their lives.

“Lord it is good for us to be here.”  Some among Christ’s faithful may have found this blessed sweetness of Christ. For a moment they were raised above the ordinary sphere of earth, and their soul felt intoxication at Divinity’s touch.  These were the slight moments of heavenly recompense, of encouragement for fidelity to Christ and His Mother. That is what the transfiguration was of Jesus to His apostles, the anticipated reward and the impetus for painful hours they would spend in the not too distant future. 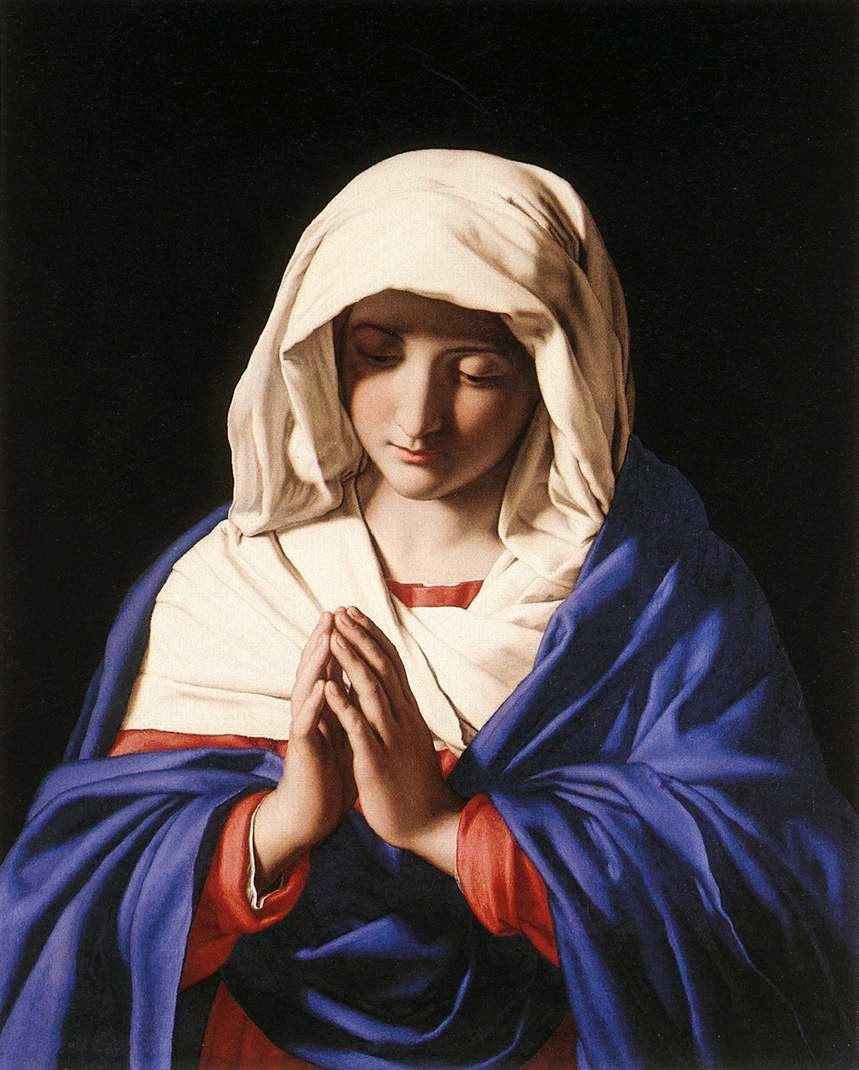 The Blessed Virgin Mary was not present at the transfiguration.  But in a certain sense, what need was there for her to be! Mary knew Divinity even before she knew the cradle. When God the Holy Ghost came upon her on Annunciation Day, within her spotless soul there came the very God of radiance and brilliance. Mary did not need Christ’s manifestations; she possessed Him.

The joy of the transfiguration, similar, though not in any way so blinding, can come to Catholic men and women, if they act as though they recognised that Jesus is their Master and their God; as though they knew that Christ wants all to come to heaven when they die; that He Himself has laid down rules of conduct for attaining heaven’s goal; that they must keep His law – at all times, even though their senses cry for violation.

Come then closer to Jesus, as the days of Lent go by. He still has to go through His passion and death, and that is not easy. Do not stand too far away from Him now.  If we are afraid, remember, He told His apostles not to be. Christ would not have told them that, but for a reason. 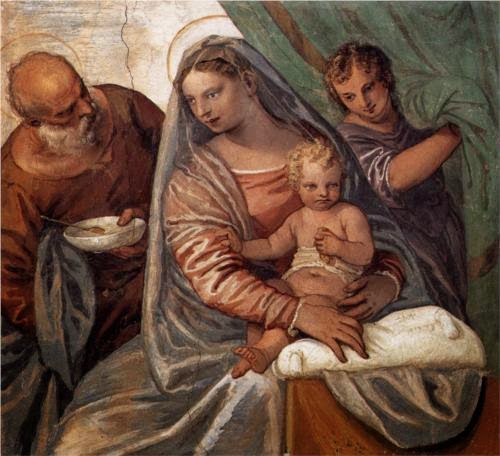 Go over near Mary, and walk with her. She will never be distant from her Son as He winds His way to Calvary. She will help us all the way through – past the scourging and the crowning with thorns, past the carrying of the cross and the crucifixion, past the vituperation of men and an empty tomb.  Mary will show us that it is always good to be with Jesus anywhere and everywhere.  The Blessed Mother of God will be with us all the way, right up until Resurrection Day, until Easter Sunday.  What is most important, is that Mary will be with us on the day of our own resurrection. That means heaven! 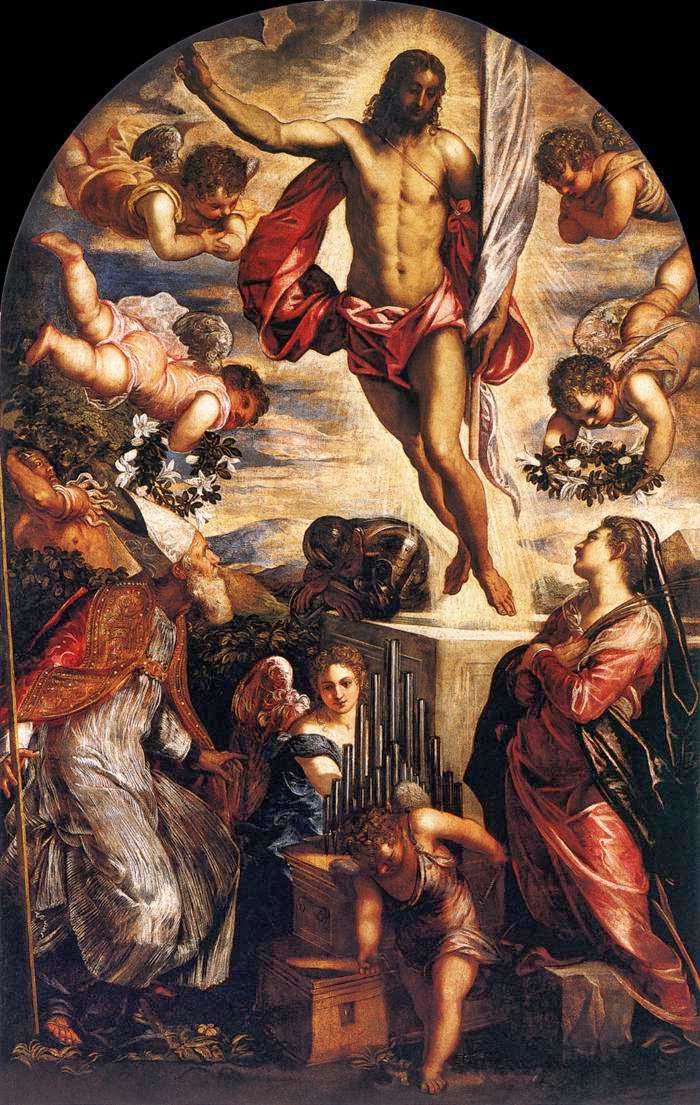 Resurrection of Christ (1565) by Tintoretto

'O Lord, thou art silent about the intense pains which hasten thy death, and dost thou complain of thirst?  Ah! the thirst of Jesus was very different from that which we imagine it to be.  His thirst is the desire of being loved by the souls for whom he dies.'
ack. 'Thoughts from St Alphonsus'

'Holy Mary, Mother of God and  Mother of mercy, pray for our Holy Father, Pope Francis, and for us all, and for all the faithful departed'
Posted by umblepie at 16:38 No comments: